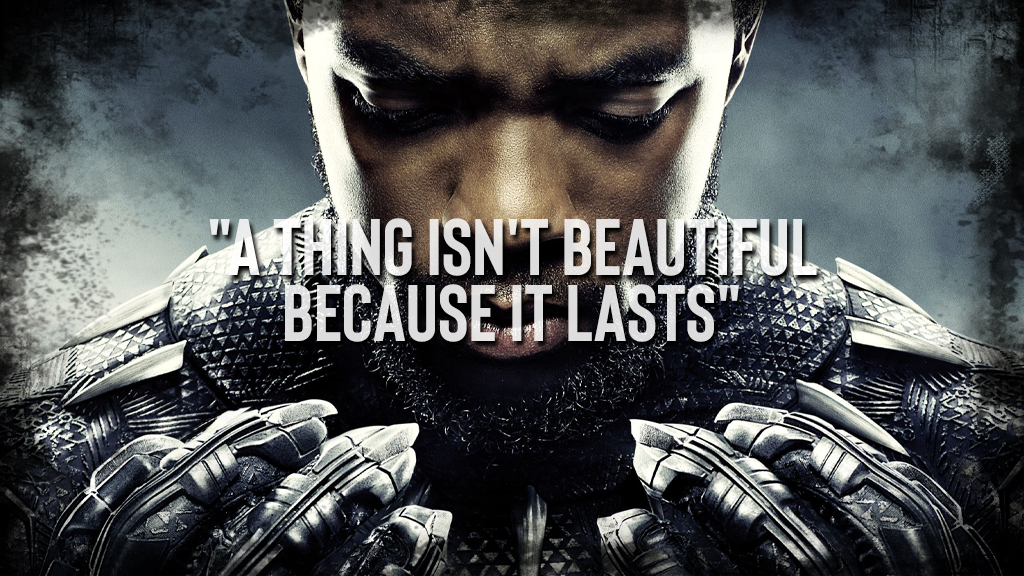 It’s never easy dealing with tragedy. Even when the path that presents itself afterward turns out to be a pretty straightforward one, there are always doubts, people second-guess themselves and insecurities creep in making the simplest of choices often overbearing. The personal aspect should always remain the main focus when addressing loss, as dealing with all the intricate complexities of human emotion is often its own struggle. But in the past few months, as the world still dealt with the loss of such an incredible talent and such a singular person in Chadwick Boseman, the professional side of things, his legacy as Marvel’s live-action Black Panther, a role that was long overdue in the dignity it brought to the character, to its nation and its people, came to a crossroad. Should the role be recast? How should the studio deal with his passing? Besides the egregious choice of going the GCI route to artificially keep his likeness assigned to the role, I’m sure there isn’t a right or a wrong choice to be made. But on a personal level, being asked to make a decision, either way, recasting really should not be considered as to further imbue both his name and his performance in the role with the dignity he too presented us with.

First of all, we should take notice of how and why certain iconic roles have been recast in the past. You can find several examples of studios making this choice, ranging from superhero movies (Batman, Superman, Spider-Man) to literary adaptations (Jack Ryan, Millenium, James Bond), from Oscar winners (Silence of the Lambs, Lord of the Rings) to some of the biggest franchises ever (Star Trek, Star Wars). But what most of them have in common is that when something radical like this happens it’s usually because we’re either talking about a reboot of the property or the story’s timeline itself doesn’t allow for the actor to return to the part for being the wrong age. Other than that it’s mostly unheard of to change a leading actor with someone the same age while trying to maintain continuity. So being, there is little precedent to something like this happening on as big of a role as T’Challa’s, especially for the reason of his possible recast. And there seem to even be a few particulars, considering both the part itself and the MCU as a whole, that should make Marvel Studios not even consider a recast of the part.

Being that reboots are the main reason most roles of this magnitude are recast, it would certainly be easier for that to happen if the Black Panther franchise were not such an established component of the Marvel Cinematic Universe. The interconnectivity of Marvel Studios’ serialized storytelling has a lot of advantages but also a few drawbacks, and if certain IP’s success might spread to other less known ones to their benefit, a problem with one of the movies could easily affect the entirety of the project. So being, to keep playing with the character and to keep making it a central focus of its own movies, you would need to straight-up reboot of the franchise, something that isn’t going to happen. Recasting the role, something Marvel has done it before (Rhodey, Bruce Banner) and will do again (Cassie Lang), has never been done on this scale, since none of those performances were close to being as iconic as what Chadwick delivered. It would be almost impossible to do it justice and in the case of the MCU, and with no reboot on the horizon, one would probably just need to accept the role to be gone.

Unlike most other MCU characters, the Black Panther part has built-in characteristics, already explained in the movies, that would make it easy for T’Challa to pass the torch to another character, be it an already established one or not. Having presented the Black Panther as a mantle that’s passed on from one ruler to another, it would make in-universe sense for another one to don the title in T’Challa’s absence, allowing for the franchise to continue moving forward without major issues. You would still need a reason for why T’Challa would be gone but as his passing is something everyone is aware of, the most honest thing to do would be to address it as it is, in the most respectful way possible. Again, we can find several examples where this has happened in other franchises, Star Wars being one. So being, in-universe it would make the most sense to leave T’Challa behind but still continue with his legacy through a new Black Panther. Much in the same way that T’Challa was inspired by his own father to be a better man, and a better king than he ever was, this new Black Panther would keep his predecessor close, guiding him on his journey.

You don’t need T’Challa to explore the Wankandan world and its way of life, so that is something that wouldn’t go to waste even if Marvel doesn’t feel comfortable with the passing of the torch. Most other earth-based MCU characters are pretty much living in familiar places, where exploring their surroundings won’t bring us, as the audience, to anywhere new. But Wakanda is a completely different beast. If Marvel decides not to recast and at the same time, for some reason, not pass on the Black Panther mantle to another character, they’re still left with an incredible world to explore within the Black Panther mythos. Even if T’Challa and the Black Panther are such important parts of what made everybody fall in love with the Wakanda Ryan Coogler managed to bring to the big screen, you can still produce compelling and imaginative content without having to leave the fictional nation’s borders. That is indeed something that seems to be in the minds at Marvel Studios, as a Disney+ series with this premise seems to be on the horizon.

Not recasting T’Challa would mean that we will have seen the last of the character in the MCU and that would obviously hurt as there are still many stories waiting to be told with the character at the forefront. But unlike other properties where leaving someone out of the movie/tv series would mean we would “lose” that particular character, the fact that the entirety of the MCU has been based on storylines developed in the comics that are still ongoing, you could easily follow a new iteration of the Black Panther on-screen but still connect with T’Challa every Wednesday when new comics are released. You’d miss Boseman‘s T’Challa as he wouldn’t be there to tell us its story on the big screen, perhaps even accentuating his legacy attached to the character, but the character would be allowed to live on through the medium where it has thrived for decades. This way you would keep the MCU’s T’Challa as Chadwick‘s alone while allowing the character to live on and still be appreciated by new generations of fans through the comics, all while a new Black Panther rises in the MCU. The same has already happened with both Iron Man and Steve Rogers. We didn’t get to explore their entire back catalog and those stories will now only be available to audiences through comics.

I understand the T’Challa part is now probably coveted by several remarkable actors that would do the part justice. But if we’re honest about it, the part, in what live-action is concerned, is forever Chadwick‘s. Any actor would probably be more reasonable if they looked to honor him through the reverence paid to his performance in the actions of their own character, as they took the Black Panther mantle upon themselves, from their predecessor T’Challa. The pressure to take the role and not try to emulate Boseman, but to give audiences a new take on the character would be hard to handle as there is no right way to do it. It would probably be best to allow whoever gets to be the next Black Panther, to be given free rein on their performance by staying away from T’Challa’s shadow.

As I said right at the start of the article, there’s hardly a right way to approach this going forward. But with Ryan Coogler already discussing his Black Panther 2 ideas with the sequel’s cast, it shouldn’t take long until we figure out what his approach will turn out to be. Let us support it no matter what it ends up being.