Sony Animations was once at rock bottom with critically-panned projects like The Emoji Movie. Yet, there was a charming trilogy that managed to pull on your heartstrings even though there was a lot against it. The Hotel Transylvania trilogy somehow worked even some were worried that Adam Sandler and his usual group of friends were cast to voice most of the characters. Yet, the addition of animation veteran Genndy Tartakovsky, the mind behind Primal and Samurai Jack, became a beacon of light for many. It turned out, that it was a combination of Tartakovsky‘s fluid animation style and a heartfelt performance by Sandler and the cast that made the project stand out. So, can a fourth entry manage the same without their involvement?

Hotel Transylvania: Transformania was quite unlucky in its release, as it originally was heading to theaters before being sold to Amazon Prime for a streaming exclusive release. Sadly, I believe that was for the better as this film does not live up to the originals in many ways. There’s a spark that is missing and it shows that this entry is more of an addition than a true sequel. In some ways, it felt like a direct-to-DVD film that tries to replicate the original but something is off.

Jennifer Kluska and Derek Drymon take over directing duties this time around and try to replicate Tartakovsky‘s directing style. It still has that fluid animation that made the series stand out from others in the animation industry, but there seems to be a habit to over animate. Andy Samberg‘s Johnny is constantly moving in the opening, but it gets to a point where it’s almost exhausting to watch. The whimsy of that fluid animation ends up lost, as you never know where to look. Summer Vacation did start the stronger focus on zaniness in its animation, but it feels like it’s truly unhinged this time around.

What will stick out for many fans of the franchise is that some of the voices haven’t returned for the latest entry. While Samberg and Selena Gomez returned to play Johnny and Mavis, the same cannot be said for others. Brian Hull takes over the role of Dracula from Adam Sandler while Brad Abrell has to replace Kevin James‘ Frankenstein. They both did their best to replicate the previous actors’ voices, but it sadly feels off at times as it feels more like they’re trying to replicate the original voices rather than bringing the characters to life. Hull‘s performance especially sticks out with a more over-the-top performance, which s likely due to how his character was written this time around.

This sounds odd because it is Hotel Transylvania but there’s an odd lack of subtlety. Yes, the franchise was always known for its over-the-top animation and quite childish humor, but there was always a soft spot that brought it together. Mavis and Dracula’s relationship was heartfelt and given a lot of attention. It seemed like they wanted to do the same with Johnny and his father-in-law, but it just doesn’t work. They go on this trip together, but we spend more time on jokes than actual character development, especially because they already had the bond they end up with during the film. It felt like we were retreading old ground for the sake of the plot rather than character progression.

Speaking of plot, the “Transformania” part of the title is a fun gimmick. Johnny’s monster design looked great and did let them have some fun with the way he moved or interacted with his environment. His want to become a monster to impress Drac is a nice touch, even if the reasoning is really forced. Also, the twist that it’s Dracula’s own fault for turning into a human was a nice hubris, even if the joke of him being normal didn’t quite land due to the best jokes being in the trailers. Now that I think about it, a big point is made about the rest of the usual crew also transforming but they are such minor characters that it felt like a distraction.

One of my favorite parts of the second film was this group of friends interacting, and it felt like a waste not to have them spend time in the human world. Yes, the plot is about Johnny and Drac bonding, but we’ve kind of already explored that in each film so far. Why not use this gimmick to its fullest extent as they play off of each other, or further explore new dynamics. Frankenstein’s transformation turned him into an ego-obsessed guy. It makes him the perfect contrast to Drac’s middle-aged look as a human. Hell, we don’t even spend a lot of time with Kathryn Hahn‘s Ericka Van Helsing, whose newly minted relationship with Dracula has never really explored There’s a lot of potential here, but it feels like it’s trying too hard to be like the previous films.

That’s kind of the issue I have overall with the film. Hotel Transylvania‘s filmography certainly isn’t a masterpiece, but there was a lot of heart that surprised me and made me really enjoy these films. Sadly, it felt like a pale imitation of the original. It’s still impressive what they were able to do with the animation and the voice cast gives a good performance, but something feels off throughout the film. It’s just missing that zing that made you fall in love with the originals, and if it’s the last in the franchise, it didn’t end on a high note. 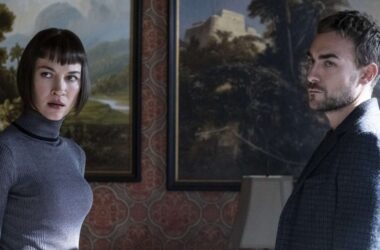 All things considered, Marvel TV lasting this long is pretty impressive. In their decade-long stint, the division has…
Read More