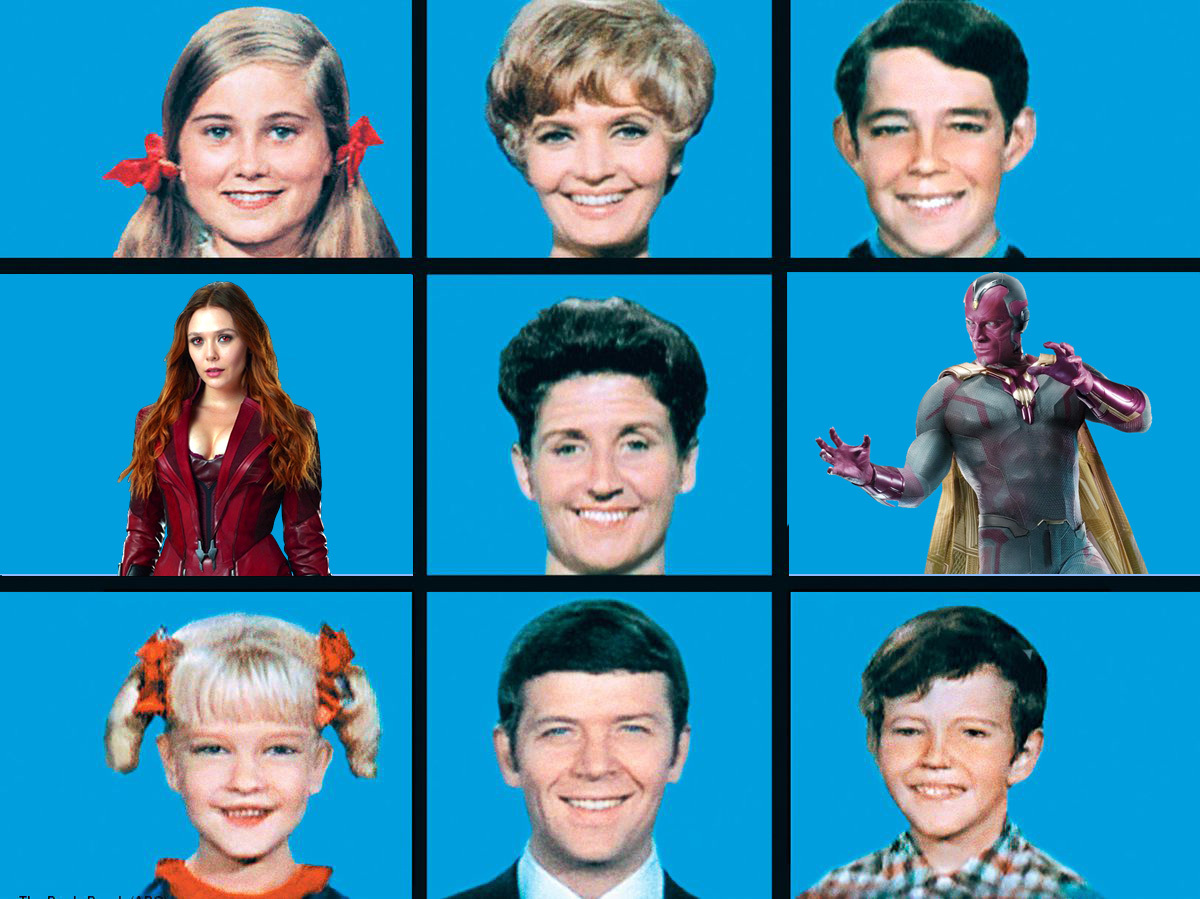 This week’s installment of WandaVision took us to another decade as the story was set in the fully-colored sitcom world of the 1970s. The transition from the black-and-white palette of the two premiere day episodes to this comparative rainbow of an aesthetic was far from the only change in the manner the decade of choice’s sitcom elements played into, though, so let’s take a look at how WandaVision tackled the era of the Third Great Awakening.

I’ve already mentioned how this episode was the first time during the series in which we saw color other than the credits and ending of Episode 2. I appreciated that the palette of the 1970s was different from the one for the scene we saw at the end of the 1960s. That one was more muted with lots of neutrals like white, beige, and plenty of shades of brown, with only the colors seen on the characters and their clothing really popping out (most notably, the purple of Vision skin and the red of Wanda’s lips and clothing).

Conversely, the 1970s is full of bright hues from Wanda’s multicolored striped number to many of the walls in the house. However, what I appreciated about this was that the designers went with colors that were particularly big in that decade, with plenty of yellows and oranges abound, as well as some darker greens and lighter blues. Here’s hoping that now that the show is in color, these deliberate palette decisions will continue every week to match the era.

Aesthetically, the episode does a bang-up job at capturing the 1970s, especially the hairstyles and aforementioned color choices. When it comes to the area of sitcom-specific material, though, the episode is pretty light on that compared to the first two. A lot of Marvel fans have been waiting for more emphasis on the action and mystery elements of WandaVision, and while we got that this week the majority of the show was still rooted in the sitcom antics but didn’t feel like it was supposed to be paying homage to other shows for the most part.

There are only two very obvious references to specific shows here: the house inspired by The Brady Bunch (which isn’t quite an exact recreation but it’s clear that an homage to the show is what they’re going for) and the theme song similar to The Partridge Family’s “Come on Get Happy”, which can actually be heard in Marvel’s own Ant-Man and the Wasp. Unlike the previous two episodes it’s mostly just the music that’s similar; since the entire Partridge Family opening sequence consists of animation and stylized photos the only specific visual emulated in this opener is The Mary Tyler Moore Show’s sprawl of colored copies of the program’s name before transitioning into live-action footage.

Unlike the first two decades, there’s no specific episode of a classic 70’s series like The Brady Bunch or The Jeffersons I could point to as the inspiration for this episode’s storyline. It seems like it’s almost supposed to be an homage to pregnancy and childbirth storylines, which have been present on sitcoms ever since their inception (though this episode is far enough along into the decades to allow the characters to acknowledge the pregnancy directly without having to dance around it with terms like “expecting” like they did back in the 1950s). I think this is actually a better method as it allows WandaVision to carve out its own identity rather than present itself as simply a tribute to old shows, but to do this after two episodes with more specific references makes this one feel as if there’s just a little something missing and I wish they would have just gone their own way a bit more from the get-go.

The Dilemma of The Decade

As I said, I appreciate the show going its own way with this episode but I think part of the way the sitcom elements contribute to the overall story is each potentially highlighting or offsetting a certain mood or attitude present in its episode. Ideally, this wouldn’t be directly lifting a story from a sitcom episode from that era, more like how the “wholesome” 1950s showcased Wanda and Vision’s innocence to the whole situation, and the changing attitudes of the 1960s taking the episode from silly fun to giving us (and the characters) a bit more of a hint as to the overall plot; the beds moving together and color being added to this world is intercut with clues as to what might really be going on.

This sort of thing isn’t really present in the 70’s episode, but the creators were probably in a tough spot here. The sitcom eras naturally have to go in order (at least for now, since it appears Wanda will discover the ability to mix them up at some point as showcased by some of the trailers) so the birth of the babies had to happen now. But unlike the decades before and after it, the 1970s didn’t really have a lot of iconic sitcoms with babies in them, even ones focusing on family dynamics like the aforementioned Brady Bunch and Partridge Family.

Women had also gained many opportunities in the working world by this point (which was nodded to in this week’s WandaVision via Geraldine telling a story about her job promotion) and things like divorce and single-parenthood were much less taboo. Therefore, a lot of the most popular shows of the era were workplace sitcoms like The Mary Tyler Moore Show, politically charged ones like All in the Family and Maude, or shows featuring non-nuclear family living situations like Diff’rent Strokes, Three’s Company, or The Odd Couple. So it’s understandable why the episode’s storyline doesn’t utilize a lot of 70s-based tropes, as they didn’t really fit with the whole childbirth plot.

Hopefully, WandaVision will be able to find a nice balance between paying homage to shows of the past, telling its own story, and including more creepy and mysterious elements in its remaining three sitcom era-based episodes.