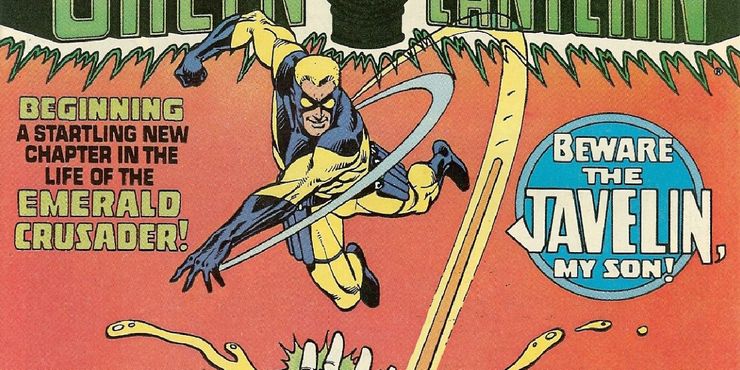 A villain whose costume and weapon cleverly took advantage of Hal Jordan’s power ring’s inability to have an impact on anything yellow, Javelin has been a fly in the ointment of DC Comics heroes since first appearing in 1984’s Green Lantern #173. A world-class athlete who inexplicably chose a life of crime over the mundane lifestyle of an Olympic athlete (you should look into it; Olympians are not well-paid despite being national heroes), Javelin spent a lot of time being a punching bag for Jordan’s Green Lantern, Green Arrow and even Supergirl.

Javelin did a few tours with Task Force X and none of them ended particularly well. Despite his arsenal of “trick” javelins (yep, that’s a thing and it’s even weirder than trick arrows), the poor bastard was dealt some pretty gruesome hands by the writers at DC Comics during his time on Suicide Squad.

The outlandish German actor/musician/dancer/overachiever Flula Borg, probably best known for either his role in Pitch Perfect 2 or the YouTube video where he breaks down the strangeness of a common insult, will be bringing Javelin to life…for however long that is. The character is sporting an exact replica of his comic book costume and looks every bit as ridiculous on screen as he did in the pages of the books. Expect Borg to steal some scenes and make an impact in the role.

Predicted Chances of Survival: OMG, are you serious? You have a guy running around looking like that with nothing but a javelin or javelins? This guy is straight up fodder and has ZERO chance of moving on past this film. Hell, I’d be amazed if he made if past 3 minutes of screen time.

Predicted Manner of Death: Javelin has had his share of bad deaths in the comics having been run over and also having been impaled by one of his own projectiles. I say, is it too much to ask for both? Let’s have him survive getting stuck with his own javelin only to then be trucked by an army vehicle, putting him out of his misery.

RIP Javelin, we hardly knew ya. Long before Marvel Studios started creating series set in the MCU for Disney+, there was Marvel Television. Marvel…
Read More Episode 5 of She-Hulk: Attorney At Law, entitled “Mean, Green and Straight Poured into These Jeans”, gave some…
Read More