Marvel Comics most recent event series, Empyre, is in the midst of its run and has received mixed reviews to this point. It’s place in the long and storied history of Marvel’s major events will ultimately be determined by how it ends and what impact it has on the future of the line but I’ve already seen a lot of fans speculating how it could tie into the MCU down the road. While we’ll have to wait to see how that goes, let’s look at some other events that could also be great fits for the Marvel Cinematic Universe.

Jonthan Hickman’s work has trended toward the cinematic and Secret Wars is probably the most definitive example of that: it is a story absolutely intended to be adapted to the screen. While a lot of people would argue that a film adaptation of this is over a decade away, I would counter that it might not take quite that long (though I do think the film might benefit from the decade long build up-complicated thoughts, I know). Doctor Strange: In the Multiverse of Madness is the first step towards this film becoming a reality and the addition of Disney + as a medium on which to tell additional stories will allow the requisite foundations to be laid.

The story itself is one of Marvel Comics all-time gems: as the Multiverse destroys itself, Doctor Doom saves fragments of each world and creates a new world where things are as he makes them but not everyone has forgotten their past lives. Now I see no road to a film adaptation that doesn’t go through Doom, but the idea of bringing characters from their disparate universes into one created by God Emperor Doom would certainly challenge, if not top, the Infinity Saga. Ten years from now will we see the Doctor Strange sequel as the beginning of the Secret Wars Saga? We could only be so lucky. 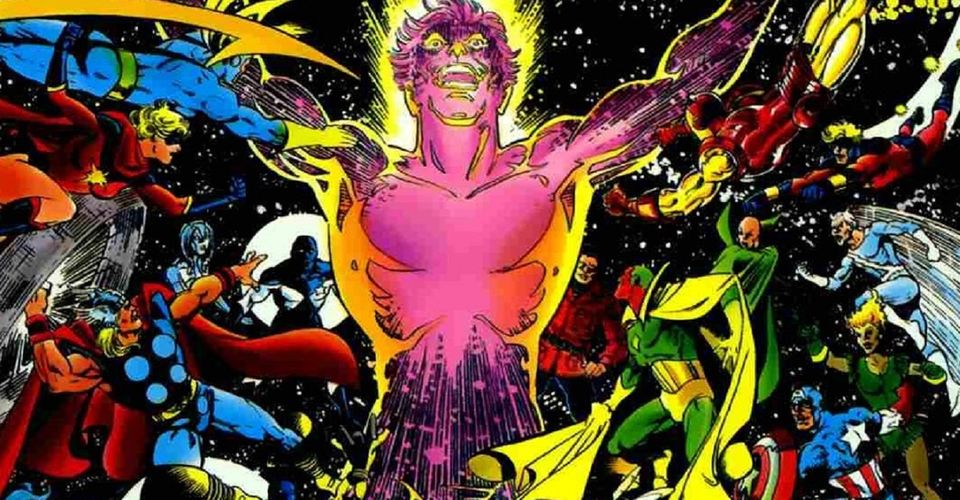 One of my all-time favorite events that’s really more of just a long run in Avengers (issues 167-177), The Korvac Saga is a fascinating story that calls into question the nature of good and evil and refuses to give an answer, forcing the reader to look inward for the answer.

Michael Korvac, a spacetime refugee from an alternate universe where the Badoon turned him into a cyborg before he defeated them and tried to destroy Earth, arrives in the 616 universe where he immediately hacks into Galactus’ ship and finds himself loaded up with the Power Cosmic. Basically, Korvac finds himself with the power and knowledge of a god and heads to Earth planning to make it his own, personal paradise. The story, which sees the original 31st century Guardians of the Galaxy team up with the Avengers, forces the reader to think about what they would do should they have to power to truly “heal” the world. Why are the Avengers, a group that have spent their entire collective history fighting against evil, trying to stop Korvac from acting in a way that essentially completes their mission for them by eliminating it?

As I said in the open, the event will make you question your beliefs and might even make you a bit uncomfortable. It would take quite a bit of work to retcon the OG Guardians from hillbilly space pirates to the kind of heroes that they are here, especially Starhawk, but that’s a possibility when you have an entire multiverse of characters at your disposal. So yeah, there are a few things to work out, but this one is absolutely meant for the screen!

As soon as we visited New Asgard in Avengers: Endgame, this one entered the realm of possibilities. Everything about New Asgard fits into the pre-existing politics of the MCU and it isn’t much of a stretch to consider that people are not going to feel good about a group of alien refugees living on Earth, especially if things go south there as I expect they will in Thor: Love and Thunder.

In the comics, Siege sees Norman Osborn, manipulated by Loki, invading Asgard which, at the time, is located in Broxton, Oklahoma. While it is increasingly unlikely we’ll see Osborn involved if Marvel Studios The-One-Above-All decides to adapt this even for the MCU, we can take comfort in knowing that the studio has already adapted some major events with some major changes and it’s worked out ok so far. In this case, I would fully expect General Ross and his Thunderbolts to be the aggressors; at the same time, I could easily be talked into Tom Hiddleston’s unreformed Loki finding his way into the mix, just like the comics. If there’s any reason I could come up with for seeing more of Hiddleston, it would be to see him in a purely evil role and that could be offered to him here.

Siege is a crazy, visceral event with some really memorable panels (Sentry ripping Ares in half is definitely the best example) and it includes a cast of characters that would be tough to assemble on screen in the current MCU, but given just how well it fits thematically, I think it’s got a decent shot of making the jump from page to screen. Annihilation was the comic event that brought me back into the fold as a Cosmic junky and, arguably, elevated Marvel’s Cosmic characters to a new level. It’s hard to follow up something as sprawling as Annihilation, but Dan Abnett and Andy Lanning not only did it but topped it with Annihilation: Conquest, an event that saw the return of Ultron and led to a new version of the Guardians of the Galaxy coming together, the team that ultimately inspired the MCU version that everyone has grown to love.

The two stories are truly massive, drawing in nearly every major Cosmic character, race and entity from Marvel’s vast stable and redefining some of them in ways that fans didn’t even know we needed. From Galactus to the Space Knights to the Shi’ar to the High Evolutionary, these events truly touched all the bases. Should they be adapted to the MCU, Disney + series may be a better fit than trying to squeeze them into a pair of 2.5 hour films and there’s certainly some work to do to get the existing universe from here to there, but it’s all doable and should absolutely be done.

The road to Annihilation begins with the introduction of the Fantastic Four and the Negative Zone, allowing for the cinematic debut of The Living Death Who Walks along with some other key characters. If you’ve read my 5-part Nova series, you know that Richard Rider would have a big part to play in these stories as well and, along with what would certainly be some new members of the Guardians, would bridge the gap to Conquest. The return of James Spader as Ultron there would be a major selling point for fans who felt he didn’t get his just due in Avengers: Age of Ultron and would also help tie the Earth-bound stories to the Cosmic corner. If Marvel Studios has any hopes of correcting course on their Cosmic stories, these two stories should be their North Star.

Rise of the Midnight Sons (1992) by multiple writers 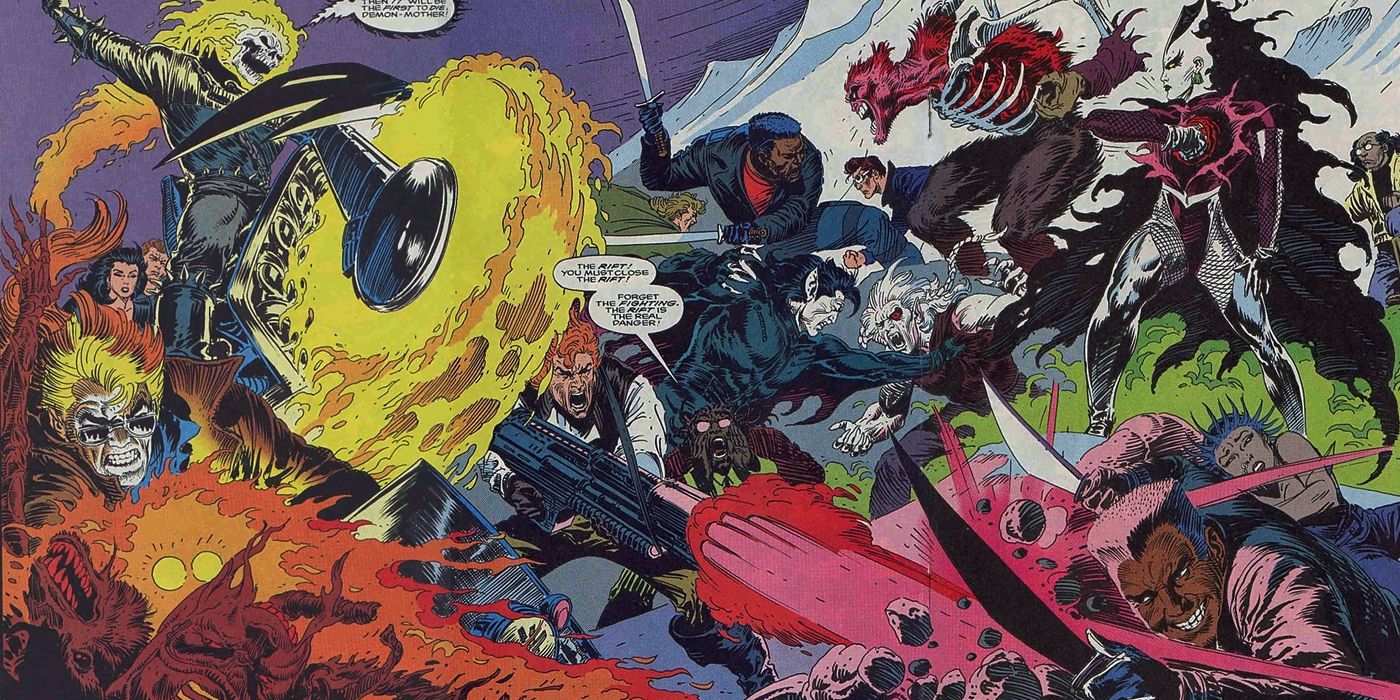 A six-issue event that spanned five different title, Rise of the Midnight Sons brought together nine occult-related characters (also called the Mystic Nine) to take on Lilith, the mother of demons. While we are unlikely to see all nine original comic book members on the team should it appear in the MCU, it certainly seems like Kevin Feige could be lining up an adaptation. The effort to bring Ghost Rider and his associated mythology into the MCU proper, the development of Blade, which is almost certain to stick closer to the source material than the prior iterations, and the rumors some other “horror-based” characters such as Dracula, Werewolf By Night and others all at least give us hope.

The original event, to be honest, is a little all over the place, but that’s what happens sometimes when you have too many cooks in the kitchen and it’s something that could easily be straightened out by the studio. This story could easily be adapted into something nice like, Doctor Strange: The Rise of the Midnight Sons, and work as the same sort of event film for that franchise as Civil War did for Captain America. The big selling point for this is event would be the idea that it would serve as a launch pad for the other characters’ properties by giving them the spotlight in the film. I think we’d be likely to see it do for some characters what Civil War has done for Sam, Bucky, Zemo and Sharon. This one would be a VFX extravaganza, but it’s definitely something that would put butts in seats and be worthy of a few buckets of popcorn.