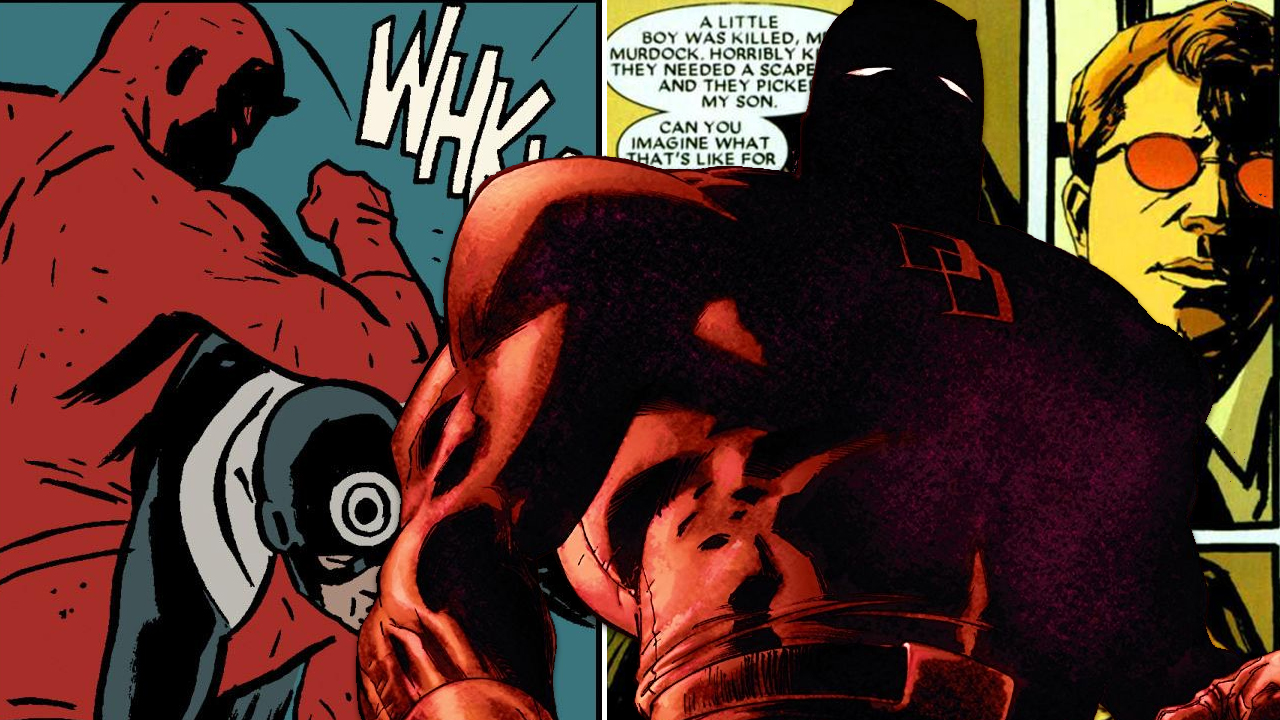 With a murderer’s row of writers and artists throughout the years, it’s no surprise that Daredevil has consistently been one of the best titles from Marvel. The title, in many ways, has served as a platform for writers and artists to explore a wide spectrum of storytelling opportunities. Some of them have gone on to be benchmarks that transcend the medium – Frank Miller’s run is still highly regarded as one of the medium’s best – while some have gone on to achieve massive critical acclaim. And with an array of good stories to his name, it’s understandably easy for some stories to get overshadowed by their more popular cohorts. So here are some of the best Daredevil stories you may have never read. 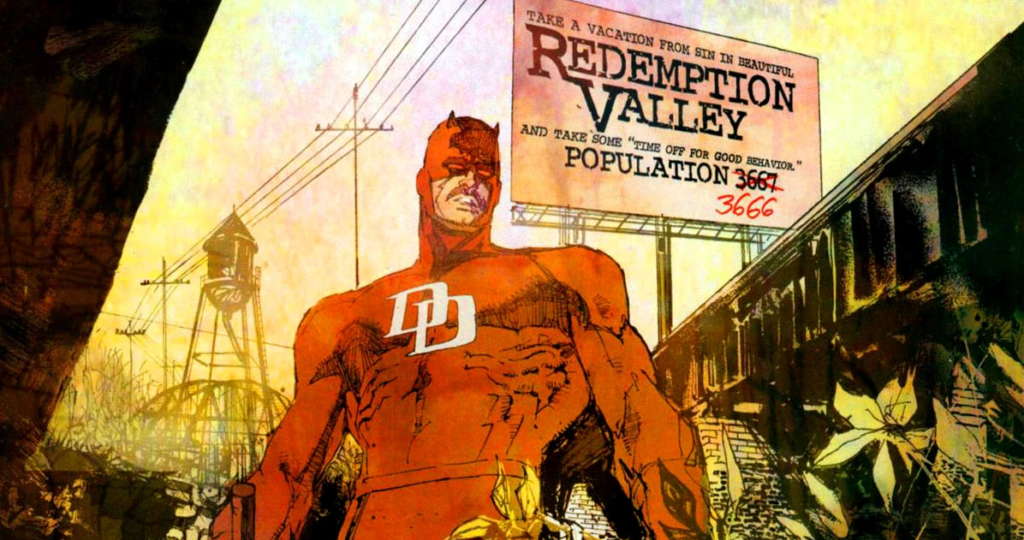 In a small hick town in the backwoods of Alabama, a child is murdered in what is believed to be a Satanic ritual. Local law enforcement is quick to charge three outcast goth kids with the crime. The mother of one of the suspects pleads for New York bigshot Matt Murdock to give her son, who she claims to be innocent, a chance to fight for the truth.

Based on the true events of the West Memphis Three, Daredevil: Redemption is a haunting portrait of a hysteric God-fearing town’s faith and the rotting corruption underneath it. The story stands among Daredevil stories not for the spectacle but for how focused it is on Matt Murdock’s character as a man of faith, law, and righteousness and how it challenges those tenets of his being. In fact, there’s barely any Daredevil in the story nor is Matt Murdock the star of it.

If you’re a fan of neo-noir detective mysteries like True Detective or Zodiac, this is an absolute must-read. Artist Michael Gaydos and writer David Hine absolutely knock this one out of the park, writing a Daredevil story that’s wholly unforgettable. 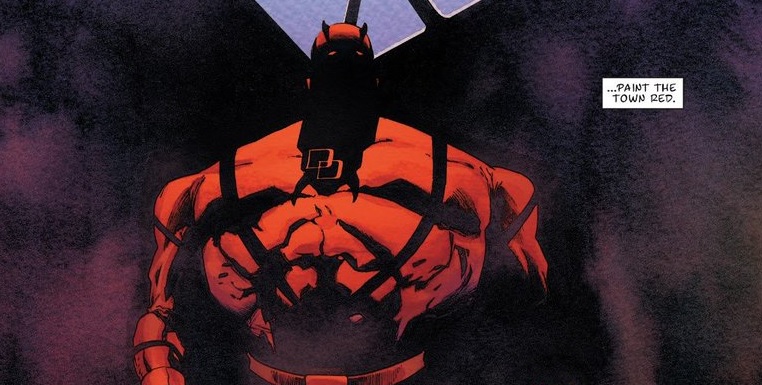 As the son of a single dad, stories about fathers hit differently. It’s a big reason why Daredevil’s journey resonates so much for me. So it probably shouldn’t come as a surprise that Joe Quesada’s tribute to his late father in the form of a Daredevil comic named Father is one that I highly recommend.

In the midst of a terrible heatwave crippling Manhattan, a killer on the loose goes on a rampage and mutilates the eyes of his victims. Matt Murdock is hired by an ailing cancer patient to sue a  company for poisoning her land. Meanwhile, a new group of mystical vigilantes has a territorial dispute with Daredevil.

Joe Quesada fires on all cylinders as he flexes his storytelling prowess by masterfully weaving these seemingly unrelated moving parts into a shocking revisionist tale of the circumstances behind Matt’s accident. Seriously, this story contains one of the biggest twists I’ve seen in a comic. Plus, if you’ve ever wondered what a hulking Daredevil looks like, look no further. 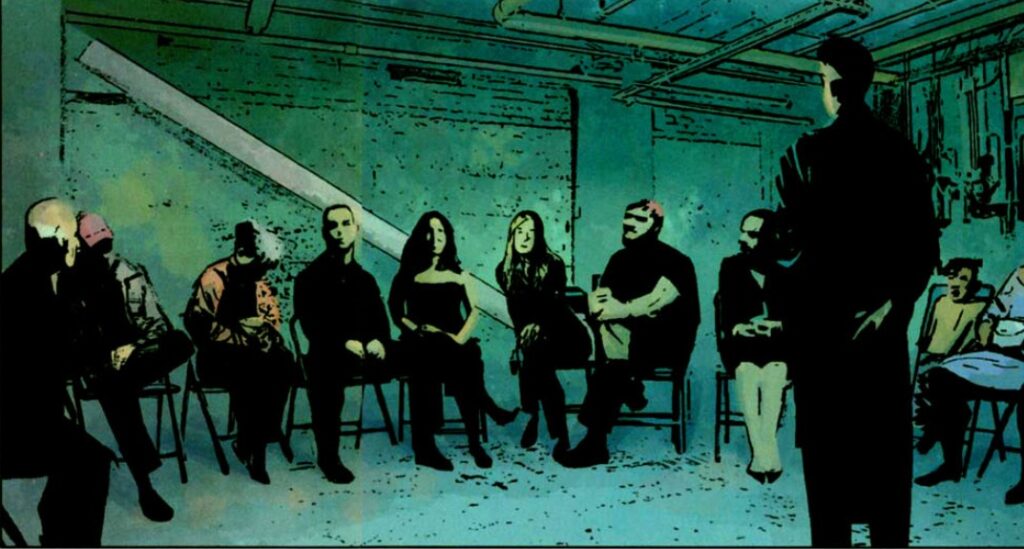 Brian Michael Bendis’ Daredevil run is arguably my favorite run of all time. I think it surpasses *gasp* Frank Miller’s on every level that it’s become the modern gold standard on how gritty Marvel crime stories should be. Over the course of 80 plus issues, Bendis and Alex Maleev took Matt Murdock to new lows and had him rise up from the pits of hell. That said, I think there’s one particular story in Bendis’ 80-issue run that stands out like a diamond in a sea of gold; Decalogue.

Decalogue stars a group of Hell’s Kitchen locals attending a support group in the wake of Matt Murdock’s ascent into the Kingpin of their borough. The comic dissects the essence of Hell’s Kitchen, the people in it, and Matt Murdock’s place in their lives as its self-appointed protector. Some lives have changed for the better, while some have irrevocably worsened.  Layer by layer, the grime, and muck that binds each person to this fabled New York borough unravels as each member in the support group tells the story of the time they crossed paths with the Devil of Hell’s Kitchen.

Another thing I love about the comic is how it sheds light on not just Matt Murdock, the superhero, but also Matt Murdock, a practitioner of Eastern mysticism. I feel like the idea of Daredevil being a ninja first and foremost gets overlooked by a lot of interpretations. 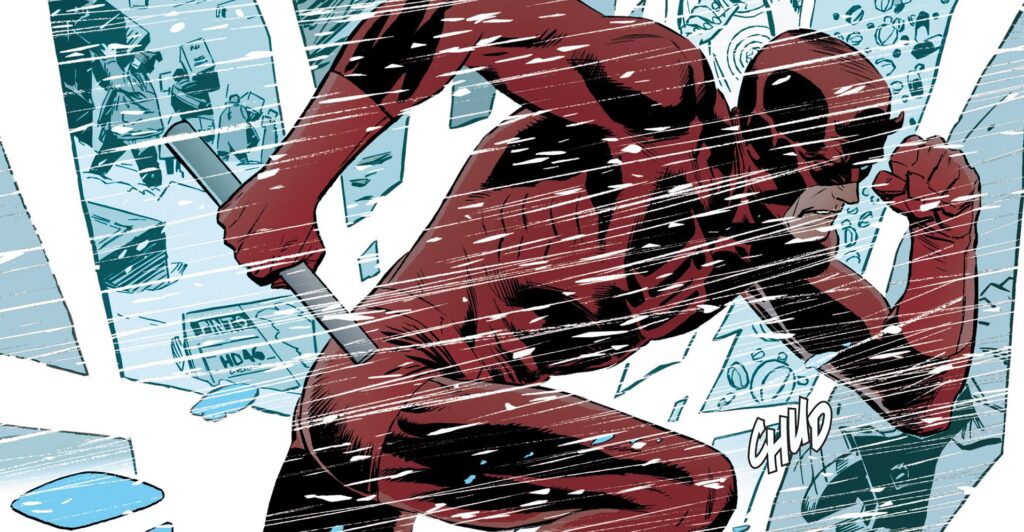 There’s never a shortage of superheroes punching their way through their problems so it’s always nice to see a comic that puts the superhero in a scenario where conflict is futile. In Angels Unaware, Daredevil is faced with the insurmountable task of getting a donor’s frozen heart across a terrible blizzard engulfing Manhattan to a dying child.

It’s a beautiful story that shows the full extent of Matt Murdock’s resilience to save lives. It doesn’t matter to Matt that he’s on the brink of hypothermia or that Kingpin’s armed forces are after him. The Devil of Hell’s Kitchen will move mountains to save someone’s life even at the cost of his own. 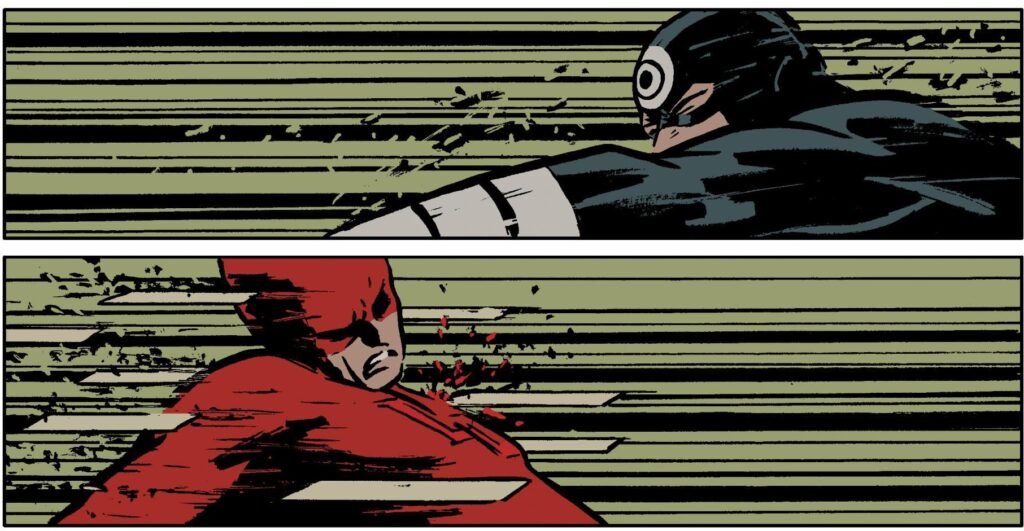 I’m lumping these two stories together because a) they’re both really short stories and b) they’re by Ann Nocenti and David Aja, two of the most prolific comic creators of their generation. Nocenti, some of you may know as one of the watershed writers for Daredevil, having created characters like Typhoid Mary and Aja as the star of the fabled Hawkeye run of Matt Fraction. That creative pairing alone merits a place in this but that’s not the sole reason why these two stories are in this.

In Game Room, Aja and Nocenti ditch the comic format and craft a short story with Aja’s subdued art serving as flourishes to the story. With no paneled art, Nocenti does the heavy lifting and tries her damnedest to have the audience visualize every single detail in the comic through prose. She does it in spades and the result is a nice little story about Daredevil investigating a suicide that might have been foul play.

3 Jacks captures Matt Murdock at a point in time at the height of his beef with Bullseye. Two bystanders witness Daredevil get brutally beaten by Bullseye and spend the day nursing him back to health. It’s a heartwarming encounter amidst a bloodied backdrop that surprisingly tugs the heartstrings as much as it satisfies anyone looking for a good comic fight. Aja, as always, destroys with his art as he crafts an amazing fight with Bullseye that’s one for the books as far as visuals go.