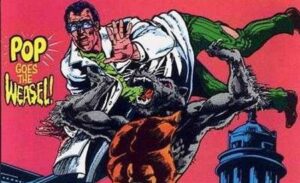 John Monroe was a sad and lonely student at Stanford University where he was received disparaging comments from his peers in which they dubbed him “Weasel”. Monroe went on to become a professor at Vandemeer University where became worried about his chances of tenure due to the fact that some of his previous classmates had become members of the board. John Monroe went on to don the Weasel suit, exhibiting great agility and hand to hand combat with a suit that came equipped with razor sharp claws. Weasel went on to kill those who he saw as a danger to his potential future at the university, when Martin Stein arrived at the university as the new physics teacher, Monroe had found his next target. When Weasel attacked Stein, he was met with the hot headed hero, Firestorm, the conjoined Stein and Raymond took down Monroe and locked him up.

Weasel was later recruited to the squad in March 1988 in a crossover between the Doom Patrol and the Suicide Squad where both teams were after the hero Hawk, who had been captured by Sandinistas. When the mission started going south and Weasel attempted to kill the Thinker, Rick Flag used the Thinkers helmet to try and get the situation under control and was coerced into killing the Weasel, He was not missed. 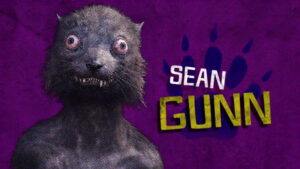 While at first many may not recognize the man behind the eyes, Sean Gunn is no stranger to a good mo-cap performance, having been the on set Rocket Raccoon for both Guardians of The Galaxy films, both directed by James Gunn as well.

The Character sport a semi accurate look to his comic counterpart, with a much more frail and cracked out figure with a set of eyes that would anyone uneasy to be around. 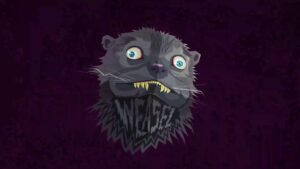 Predicted Manner of Death: I fully expect him to attempt to betray the team and be killed within the first few minutes of his freedom, like dead on sight