The Batman‘s release is just around the corner, and it seemed fitting to take a look back at the many films that defined the character on the silver screen. So, welcome to our latest review-a-thon revisiting the Caped Crusader’s cinematic history. To kick it off, you can’t really talk about the franchise without mentioning Tim Burton‘s 1989 film simply titled Batman. Even back then, people doubted Michael Keaton in the titular role, but he would go on to define not only his career but also comic book history by bringing the character to life. Later this year, he’ll even return in the role for a new generation to meet THE Batman that defined many people’s childhood. Yet, after over 30 years, does the film still hold up, or is it hiding behind a Gothic mask?

After rewatching it, I’ve remembered that most of the main plotlines of this story surround Vicky Vale. Not only is Bruce Wayne strangely obsessed with her, but even the Joker has a liking to the young reporter. He ends up ditching his romantic interest, who he uses for questionable experiments, as soon as she catches his eyes. Wait, that’s not even it, as her reporting partner, Alexander Knox, seemingly you – guessed it – has a crush on her. This rhombus of a love triangle permeates throughout the entire film, it makes you wonder why they didn’t have Bob join in just for the hell of it. Though that’s the same guy who thought a dude in a rubber bat suit had a wallet on him somewhere; he probably has other worries at the time.

But you can’t forget that Bruce Wayne, the moment he sees Jack Napier return as the Joker, just wanders around starring at him. While I know Jack Nicholson‘s performance is mesmerizing throughout the film’s runtime, he already saw the guy earlier when he threw him into the vat of whatever can turn a man into the human equivalent of an eggshell. So, either he just really loves clowns, or it was love at first sight. He is the greatest detective after all. So, he must’ve known that quietly following a murderer – in broad daylight mind you – won’t get him killed but a flirty wave goodbye. The moment Vicky steps in, he just bolts without a word. If you ask me, that’s suspicious.

The more I think about it, was the line “let’s get nuts” bit more a test. I mean, Joker goes on to pull off the line “never rub another man’s rhubarb” and the whole room really thinks there’s no sexual undertone at play here? I think not! The more you think about it, everything the Clown Prince of Crime does is to get Batman’s attention. Yes, he claims it’s about being more famous than the bat-themed Power Ranger, but he can’t lie. He knows the guy is going to show up if he makes enough people smile to death. The guy walks around with a gun in his pants that screams “compensating for something” and definitely trying to show off. Batman is no exception with his “Batmobile” that can’t take a turn even if its life depended on it.

Before he turned into a mad clown, he was a calculating gangster. Just because he is selling make-up that puts permanent death grins on its victims, and starts obsessing about a woman’s photos of dead people – by the way, what the hell was up with that, Vicky? – that doesn’t mean there’s a plan at play here. If you ignore the dramatic implications of Joker turning out as the murderer of Bruce’s parents, you start to realize where the inspiration of their relationship in The LEGO Batman Movie came from. It was in our faces since 1989, but we were just too focused on the fun superhero action and a great story to really look a little deeper.

Let’s be honest, the Vicky Vale romance may have been hiding the true love story all along, as two different worlds collide and are desperate for each other’s attention. Even during the finale, he’s just waiting for his prince in plastic rubber. Dancing with Vale in his arms, while Batsy is desperately trying to get close. If he really was as obsessed with her as the film is implying, they would’ve been gone a long time. Hell, he could’ve taken out Batman if he wanted to. Even as they are hanging, the one to fall is Vicky and not the Caped Crusader. He’s obsessed with the man that just manages to put a smile on his face, a permanent one.

There’s just something about the romantic setting of Burton‘s Gotham and the slower pace that lets you take it all in. We’ve really been enjoying a superhero epic that was hiding an unlikely love story for so long. Vicky Vale is in the middle of a story that may not actually be about her. The true reason Batman wasn’t there to meet her wasn’t because of the Bat symbol, but the memory it holds for what was lost during the final confrontation. Perhaps he really did want to dance with the devil in the pale moonlight. 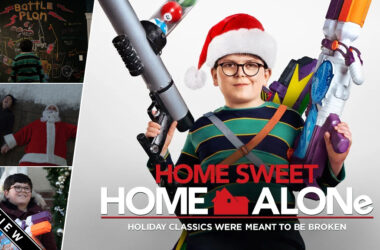 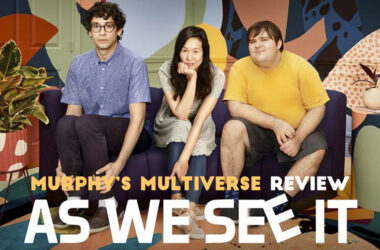