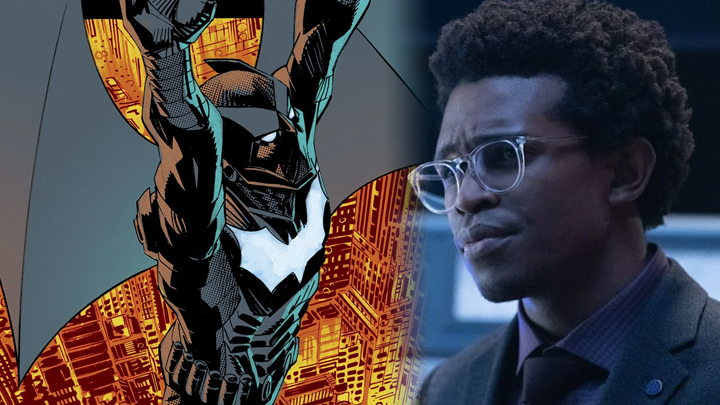 Ever since the first season, Camrus Johnson‘s Luke Fox has been Batwoman’s Man in the Chair. He stepped into his father’s footsteps, who had a similar role for Bruce Wayne. The character has seen a dramatic shift this season and recent set photos confirmed that he’d be hopping out of his chair and straight into the action. We all theorized he’ll join his comic counterpart by donning the identity of Batwing. While it wasn’t officially confirmed, Writer Caroline Dries shared the first promo images of Johnson‘s Batwing suit that he’ll wear for the first time in the upcoming finale of Batwoman‘s second season, and finally, fight alongside Batwoman.

The look is heavily inspired by the character’s first appearance as the hero in Batwing #19 after picking up the mantle from David Zavimbe following the hero’s retirement. Fox was quickly recruited by Batman to take over the role. In a statement to TvLine, Johnson explained how excited he was to be wearing the suit and being a role model for kids to look up to.

Honestly, it’s hard to explain how much it means to me to wear the Batwing suit and officially play my first superhero, The main reason I wanted to be in Batwoman was for this opportunity — to give kids like me another Black hero to look up to and relate to. It’s hard not to smile when I catch myself in the mirror with the bat symbol on my chest, and I’ll keep smiling through every fight scene, every awesome stunt, and every Gotham night where Batwing is finally in the field!

It’s definitely exciting to watch the Batfamily grow more and more. While we don’t have them all in one universe it’s great to finally see some of comics’ famous and inspirational heroes from the DC Universe brought to life. The second season finale of Batwoman is currently set to air on June 13th and will see the debut of Johnson as Batwing.