Nathan Miller
14
0
0
Following the news of an Echo series officially heading to Disney+, Marion Dayre has unveiled the writers’ room for the series.
Total
14
Shares
14
0
0

In March, it was revealed Marvel Studios was developing an Echo series as a spinoff from Hawkeye. The news was officially confirmed by Marvel Studios and Disney+ on Friday as part of Disney+ Day. While details remain sparse on the series, we have since learned a bit more regarding the behind-the-scenes of Echo.

We previously reported on social media clues suggesting Bobby Wilson and Rebecca Roanhorse were part of the Echo writers’ room. Marion Dayre yesterday confirmed that she was the Lead Writer on the show, and has now revealed the writers’ room. Native American and Deaf representation in the room matches the intersectionality of both its lead actor Alaqua Cox and title character Maya Lopez. Writers in the group have worked on Netflix’s Daredevil and The Punisher, as well as shows such as Supernatural, This Close, Reservation Dogs and Stranger Things. 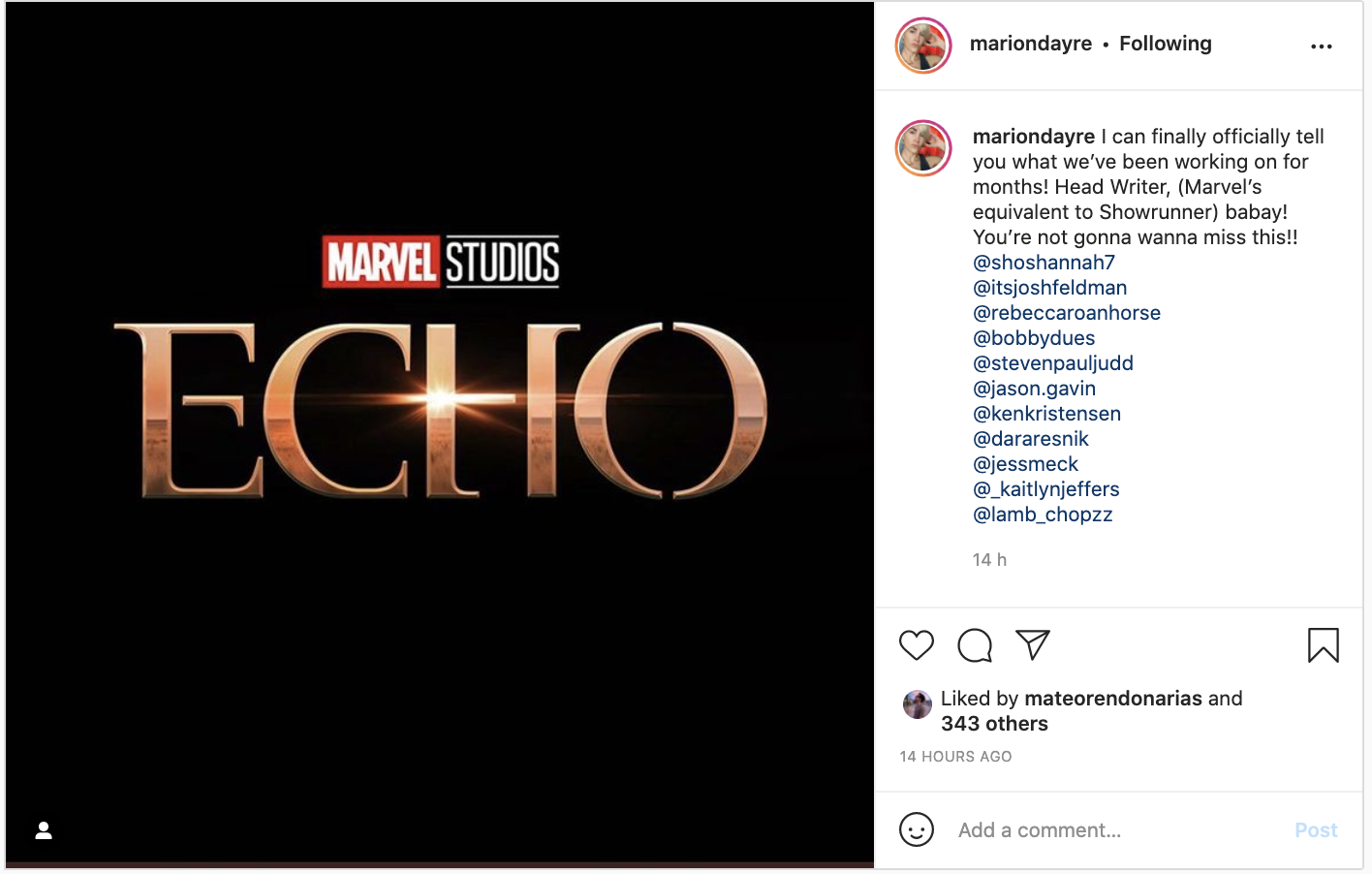 The group features two Deaf writers in Shoshannah Stern, who also starred in Supernatural, and Josh Feldman, who with Stern co-created and wrote the Sundance show This Close. This suggests the Deaf element of Echo’s identity will be explored further beyond Hawkeye. Of the other accounts tagged in Dayre’s post, many of the writers are Native American. Bobby Wilson has worked as a writer on Rutherford Falls and Reservation Dogs, the first two TV shows with Native American showrunners. Rebecca Roanhorse is a science fiction author and is currently writing an Echo comic series for Marvel in Phoenix Song: Echo. Alongside Kaitlyn Jeffers, Steven Paul Judd and Jason Gavin it will be great to see more about Echo’s Native American background on the show. Ken Kristensen wrote on The Punisher, Dara Resnik has written episodes of Pushing Daisies and Daredevil, and Jessica Mecklenburg has written on Stranger Things. The mix of drama and comedy within this group suggests that Echo will be emotionally impactful and entertaining.

It’s exciting that Deaf and Native American voices have helped craft Maya’s story in the Marvel Cinematic Universe. To have a Deaf, Native American amputee as the lead actor in Alaqua Cox is a particularly innovative and thrilling choice that will hopefully push the industry forward. Marvel Studios must have known they had a star on their hands with the Echo’s LLC being incorporated a month before Hawkeye started filming. With Echo officially announced and scheduled to film in early 2022, we should begin to learn more about the series in the upcoming months perhaps.