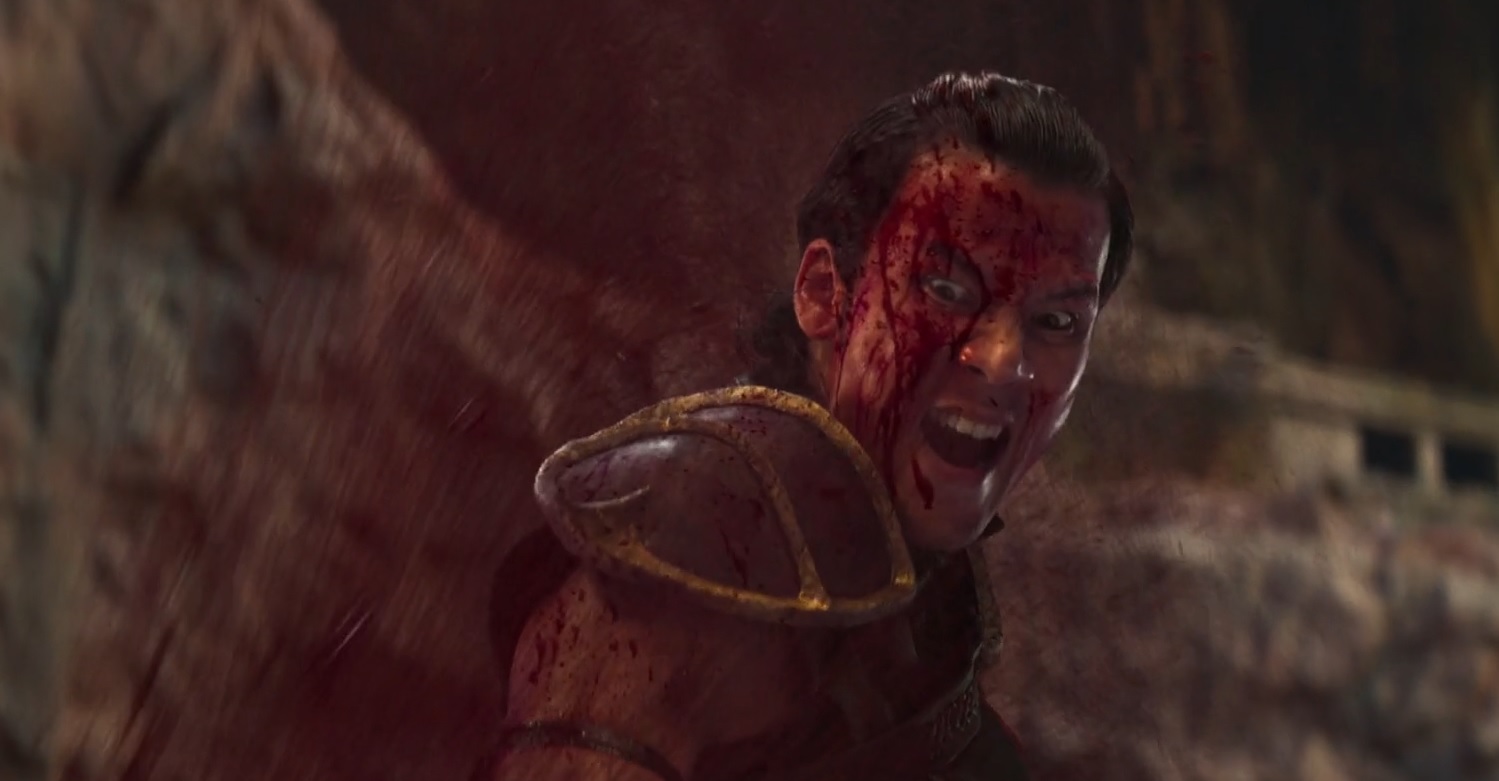 Approaching this review has been a contemplative battle for me. Mortal Kombat 11, in the past year or so, has revitalized my long-lost love for video games. A chunk of my 2020 was spent online, at least 2 hours daily, losing my mind over getting teabagged and fatalitied by a scrubs on wifi playing Searing Rage Scorpion and crackhead Kung Lao players that do cross-up divekicks every 2 seconds. Over 800 hours was tallied for Mortal Kombat 11 alone in my 2020 Playstation Network wrap-up. When I was in high school, while all my classmates were into playing Tekken, I immersed myself in the lore-heavy era of MK games from Deadly Alliance to Armageddon. Needless to say, Mortal Kombat has been a huge part of my life in general. So do I approach this review first as a diehard fan?

The thing is, I’m also a fan of filmmaking. I love a well-written story: characters that have fleshed out motivations and a plot with some semblance of functionality. Video game movies are still as bad as they’ve always been and I think that’s in due part to everyone’s resignation that as long as a film replicates the dumb, mindless fun offered by a game, it gets a pass. While “It’s not that deep. It doesn’t need to be serious,” can be at times a valid argument, it’s oftentimes used to validate bad filmmaking. The bar will always be low if we think violent fight scenes solely make a Mortal Kombat movie great. So should I be uptight about how video game movies can’t seem to be ever good movies?

The lore of Mortal Kombat has always been difficult to fully comprehend. Even for myself, who partakes in an incomprehensible canon such as the Marvel Universe, still cannot process why things are a certain way in this world. I don’t understand how the modernity of Sonya Blade’s world manages to clash with the foregone feudal age of Scorpion’s on a daily basis and that’s okay. The Mortal Kombat lore is so overwhelming and rich that it’s bound to have some inaccessibility which leads to creative liberties in any attempted adaptation. This modern version is no exception.

For starters, there is no tournament in the movie about the tournament. The movie establishes that Earthrealm is on a 9-tourney losing streak to the evil Outworld. Mortal Kombat stipulates that if a realm wins against another in a FT10 (first-to-10, a fighting game staple), said winner may invade the losing realm. So it’s match point for Outworld and one more win would doom Earthrealm for good. There’s one catch though: Shang Tsung doesn’t want Earthrealm to have a fighting chance against him so he hatches a plan to kill off all the good guys before the tournament begins, while they’re all training. Instead of giving us one final tournament to rule them all, the movie just gives us the pre-game locker room rumbles. That’s when the movie starts falling apart.

The problem isn’t that having no tournament is bad. The games have been far removed from the tournament concept for several years now. If anything, the current Mortal Kombat landscape is more Days of Future Past than Bloodsport, the movie the franchise built itself on. The problem is that the plot predicates itself on the tournament and spends time building on it, only for it to get ignored completely by the finale. The entire first 2 acts are already plodding to begin with, solely about exposition about Mortal Kombat and the heroes preparing themselves for the tournament. With the promise of a tournament, those 2 acts work in spite of the plodding but without it, they end up feeling not only pointless but also undermined.

And then there’s that thing about dragon marks and arcanas. In order to streamline some of the more fantastical concepts in the lore, they introduce these two things. Dragon marks are markings found on people who are worthy of joining Mortal Kombat. These markings are passed on by killing those who have the mark. It’s an absolutely ludicrous concept that barely makes any sense. Not to mention it kinda defeats the purpose of lineages and bloodlines. Also if anything, it adds more wrinkles to Shang Tsung’s master plan. What happens when a 60-year old housewife accidentally runs over Liu Kang with her car? Does she have to join Mortal Kombat?

Being a marked person also means you are eligible to acquire a random power called arcanas. The movie makes it clear that being a good fighter isn’t enough for Mortal Kombat and that arcanas are needed to level the playing field. Problem is, arcanas can’t seem to be acquired through training. When we see Cole Young and Kano get theirs, it’s during highly emotional situations. The movie treats the concept like it’s a latent mutant power that manifests when you need it the most. This lore change is easily my biggest nitpick in the film. I say nitpick because fundamentally I understand what they’re trying to do but just as a fan of the material, I don’t agree with the need to explain why everyone has powers. They just do. Liu Kang can throw fireballs. Kabal has super speed. Kung Lao can teleport and manipulate his hat. This isn’t the early-2000s anymore. Audiences can get by seeing powered people in a fantastical world without explanation. It’s even dumber seeing that applied to tech-based characters like Kano, Sonya, and Jax.

Cole Young is on the frontier of all these changes. This character raised a lot of eyebrows when it was revealed the filmmakers were introducing a brand new character in the film. In a mythology rich with diverse characters that could have functioned as a surrogate for audiences, creating a new one just seemed pointless. Having seen the movie now, he’s mostly fine albeit cookie-cutter. There’s not much to his character other than being a family man. There’s no intrigue to his lineage nor does there seem to be any pathos as to why he’s a has-been fighter. It doesn’t help that Lewis Tan isn’t that great of an actor. But despite all that, he certainly wasn’t a sore spot in the film like some people initially expected. The question still stands as to whether creating him was the way to go but his barebones character arc serves the story enough.

The filmmaking of this movie is interesting. It’s certainly a shinier, sleeker, more expensive, next-gen version of the 1995 classic but it also has a weird choppiness to the way the movie is edited that is at odds with the impactful energy the scenes desire to have. And it’s a problem that you can feel in a lot of scenes, from the fights to the transitions. There’s a moment where Raiden teleports himself in between the good guys and bad guys and it’s evident that it’s supposed to be this momentous badass arrival. Instead of showing the full scale of his electrifying entrance, they cut to him several frames after he arrives. There’s a Twitter thread out there that perfectly articulates why some of the fight scenes don’t feel as impactful as they should be and it’s down to the editing once more. The inconsistent editing becomes a disservice to the skilled real-life fighters they brought to star in the film.

All of this is not to say that Mortal Kombat is a movie you should write off. The movie gets a lot of the game’s spirit correct. Not the least of which is how it handles the core roster. I think more than anything, a lot of fans – casual and diehard – are coming out of the woodwork to express their happiness with how these iconic characters are portrayed. Kano for me and many others is probably the surprise MVP. They get the personality right; he’s an asshole you love to hate and hate to love.

The Shaolin Monks are done right. Ludi Lin and Max Huang as Liu Kang and Kung Lao, respectively, are pitch-perfect in the role. Lin plays the textbook teacher’s pet really nicely while Huang nails Kung Lao’s brash persona. Jessica McNamee’s take on Sonya feels familiar in a good way though I wish we got more of her military expertise in the movie. Like Sonya, Jax doesn’t really get to flex his military expertise but it’s hard to complain when he gets to fatality Reiko’s head.

Clearly, the true stars of this movie are Joe Taslim and Hiroyuki Sanada. Two legends playing two icons, what else can you ask for? Much of this movie is anchored around Scorpion and Sub-Zero and the pay-off we get in that 3rd fight almost makes all bad stuff in this movie forgivable. Granted, Taslim doesn’t get much to do but stare coldly at his fellow cast members but his version of Bi-Han absolutely works. If he doesn’t return as Noob Saibot in the sequel, what’s the point of this franchise? Sanada’s turn as the vengeful specter Scorpion is so good to see. He even manages to add a bit of pathos to the role in the film’s really strong opening sequence. It’s a shame it takes the movie 90-minutes to get to his showstopping appearance but it’s worth it in the end.

Because they’re such key players in the lore, there’s a lot to be desired from this film’s Raiden and Shang Tsung (two of my mains in the game!). Chin Han is unfortunately tasked to ape Cary Hiroyuki-Tagawa’s version of the sorcerer. In most scenes, it feels like a forced imitation of a role with such an iconic disposition. Should a sequel be in the books, I want this Shang Tsung to actually do some stuff for once. Give Chin Han more to do than just sit and watch and distinguish him better from the 1995 version.

Tadanobu Asano’s weary take on the character is a far cry from the broad version of the Thunder God voiced by Richard Epcar diehard fans like myself have gotten used to (I could care less about Christopher Lambert’s version, sorry). Like Shang Tsung, part of the problem is they don’t really give Asano’s Raiden anything to do other than to teleport people. Raiden in the lore functions a lot like Optimus Prime; he’s the guy who brings everyone together, holds the fort down, and gives inspirational speeches when the team hits their bottom. I would’ve loved to have seen Asano’s world-weary grumpy Raiden come into his own here.

But really, the only two reasons people partake in anything Mortal Kombat related are violence and kombat. This movie offers a lot of that. The movie even goes so far as to replicate Kung Lao’s MK9 buzzsaw fatality, which to me is still the most disgusting fatality they’ve put out to date. And even though not all the fights are up to par, when they’re good, they’re pretty damn good. That Scorpion and Sub-Zero fights alone are worth the admission.

Mortal Kombat does its due diligence as it will have fans recreate the OUATIH DiCaprio meme whenever a catchphrase or signature move plays on screen. It’s violent, indulgent, and nonsensical most of the time which in many ways lines up with the video game’s basic tenets.  But getting basic stuff right can only give a film so much mileage. Mortal Kombat’s lasting legacy to the public may be its gore but to diehards like me, it’s the widely imaginative mythology that keeps drawing us back. It’s why the 1995 film is still so beloved despite it being a bad film (and there’s barely even blood in it!). That awe is, unfortunately, missing in this brand new iteration. Like a scrubby Sheeva player with no other strings at their disposal, this film leans heavily on the unblockable stomp; the easy win by way of the franchise’s lucrative brand of violence. If anything, watch this for the gore but play the game instead for the full Mortal Kombat experience.