We’ve had a lot of time on our hands over the past few months and it’s found both of us digging through and rereading old comics. What started out as a side comment while recording the podcast turned into this list of our favorite alternate takes on the costumes of some classic Marvel characters, which, in some cases, came from alternate universe takes on those characters. Enjoy!

In this case at least part of the appeal of the costume to me is that it debuted in what’s undoubtedly the best Iron Fist story ever told. Ed Brubaker’s The Immortal Iron Fist put a legendary spin on the story of Iron Fist and created an incredible history behind the iconic mask worn by Danny in addition to adding the Seven Capital Cities of Heaven to the mythology both of which gave so much more meaning to the symbolism of Danny’s costume.

This sleeker, stripped down version is now the default in my head for Iron Fist. I also loved the simple addition of the fist wraps to a guy who can channel the power of the Iron Fist. This subtle redesign absolutely stands out as one of Marvel’s best.

Settling on just Black Bolt when thinking about the Earth X designs was tough because, in all honesty, as much as I love the Inhumans, they always felt TOO human, especially the Royals. Yeah, I know Gorgon and Triton look like creatures and Karnak has a forehead you could show a drive in movie on, but for a group of individuals with alien DNA who are mutated by Terrigen, I always thought they looked pretty average. Then came Earth X…

Earth X totally redesigned the Inhumans making them way more alien while still staying true to the characters and it was Alex Ross’s Black Bolt design that absolutely stole the show. By adding the full face mask and taking away any visible facial features, Ross turned Black Bolt into something actually inhuman and terrifying. The look was so terrifying that it was recently used as the basis for an Inhuman villain, Vox. I have a real love for almost all of Ross’s work, but if I was asked to pick just one that made the jump to the big screen, it would be his Earth X Inhumans.

Roy Thomas is a legendary writer and one of my all time favorites. He created some of Marvel Comics iconic characters and teams over the decades and his work fueled my imagination throughout my childhood. One day, in 1969, for no particular reason at all, he thought to himself, “I’m going to put a mask on Doctor Strange” and thus was born the best looking version of the character to date.

Now the origin of the mask and all the associated nonsense that went with the weird villain who tried to steal Stephen’s identity and why Stephen continued to wear it don’t really support how cool of a look this was for the Sorcerer Supreme, but we can’t fault a guy named Dr. Stephen Strange trying to protect his secret identity as Doctor Strange… 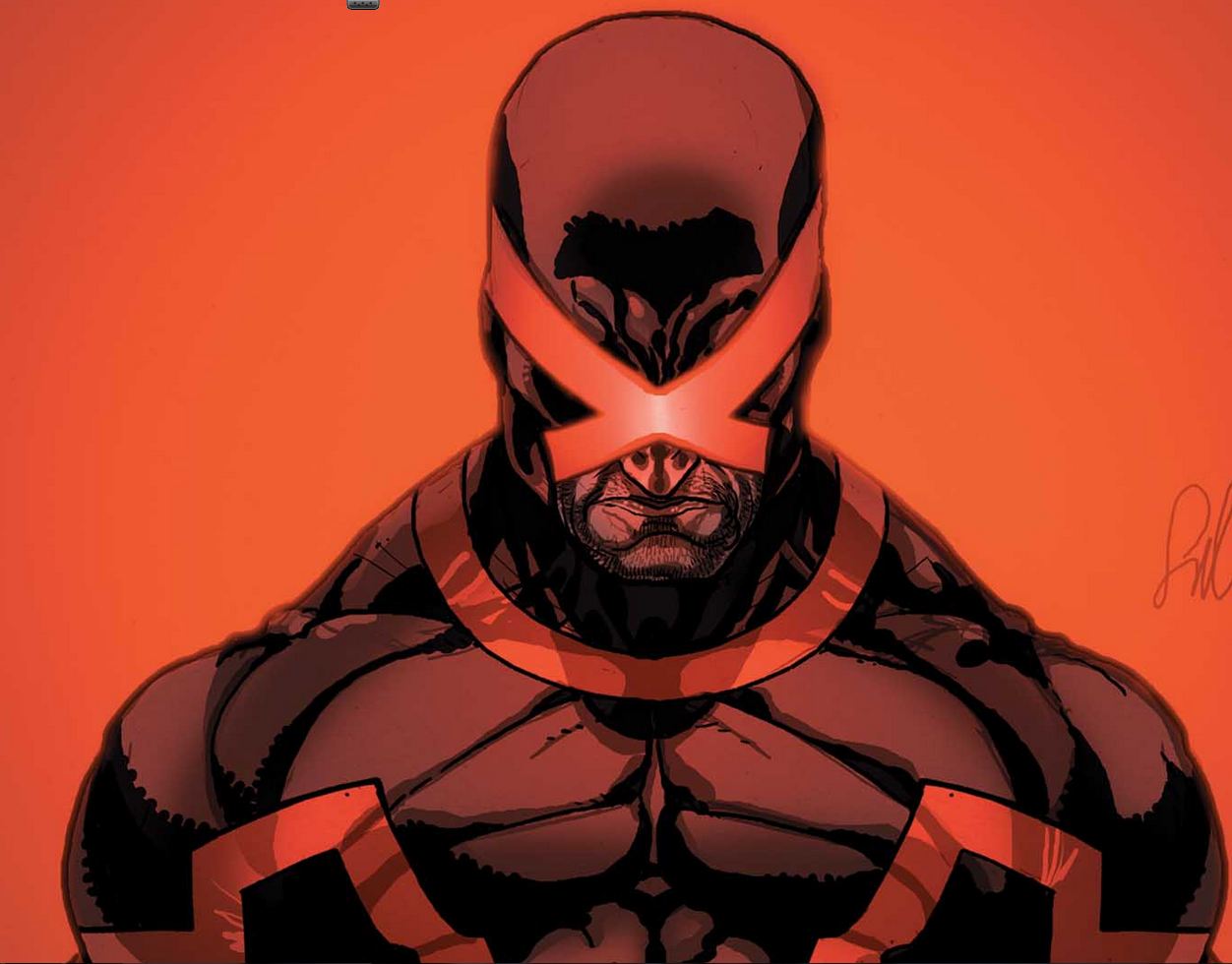 A costume that made no sense for a man who had utterly lost his way. Cyclops has had a lot of costume designs over the years, but this one is by far the one that makes Scott Summers look like a verified bad ass. While fans were certainly divided on Brian Michael Bendis writing Cyclops as an outright baddie (although a lot of fans would tell you at the time that “Cyclops was right!”), there’s no denying that Chris Bachalo’s design gave him the look he needed to fill the role, even if I still don’t know how Cyke’s powers worked through that X-shaped visor…

I loved the look and really enjoyed watching Scott continue to try to follow his version of Xavier’s dream after killing his mentor, losing control of his powers and basically ostracizing himself from everyone he’d ever known. If there was ever a time to totally redesign the character, it was then and this look absolutely stands out among the various other versions.

Sometimes excellence can be found in simplicity and that’s Spider-Man Noir. You’d have to look really hard to find someone who doesn’t know what Spider-Man looks like. Spidey is one of the most recognizable heroes in the world and his brilliant, original costume design is part of the reason why. The brilliant colors, the detailed patterns, they symbol…it’s a perfect super hero costume. So why take it all away? Why take away the colors, the patterns, the symbol? I don’t know why, but when you do and you dress Spidey up all in black, give him a trench coat and some guns, you get one hell of a great look as well.

The costume looks so good that it inspired Peter’s stealth suit in Spider-Man: Far From Home, was featured in Into the Spider-Verse and was put into production as a Marvel Legend. It’s a stark contrast to everything Stan Lee and Steve Ditko built into Peter Benjamin Parker’s legendary design, but for me it stands out as one of my favorites because it took everything away and worked because it was so simple.

The Ultimate Universe is the home to some of comics’ most absolute garbage storytelling. But sometimes, they do get some things right. Setting up a fall-from-grace arc for Reed Richards, culminating in his transformation into one of Marvel’s scariest villains, is one of them.

And boy, does Maker have a great look to him. What makes this costume so great is that it plays right into the characterization of Reed Richards as an insecure nerd. Reed knows he’s never going to be the most attractive guy in the room. But what happens when the smartest person on the planet snaps and stops giving a shit about everything and anyone but himself and his obsession with knowledge? He increases his brain mass by completely deforming his face, amplifying his intelligence by a thousandfold, and creates a sentient city capable of overtaking the planet in a span of days.

I believe that the Maker is a character that needs to be in the MCU. The Fantastic Four is known to traverse alternate realities. In the comics, Prime 616 Reed Richards was inaugurated into the Council of Reeds, a clandestine society of versions of Reed Richards throughout existence. The Maker could be brought into the MCU through that idea.

Anytime the Hulk gets a gimmicky redesign, it’s always something to look forward to because you know it’s some bullshit to make an indestructible god-like being interesting. In the Marvel NOW relaunch of the character, Mark Waid and Leinil Francis Yu decided to let Bruce Banner don a S.H.I.E.L.D. biosuit to assist him in particular situations. Along with the biosuit, Bruce had his own R2D2 in the form of R.O.B., a talking robot sent by Maria Hill to babysit the Hulk.

To me, what makes this Hulk revamp such a change that’s worth noting is because for once, Bruce has his sights set on the betterment of mankind and not just himself. A big part of the story is Bruce coming to terms with his gamma-radiated condition (treating it not like a disease you can magically cure but a disease that should be controlled and managed) and dedicating his scientific expertise to help the world progress. The saying goes, “Hulk destroys. Banner builds.” Such a cool approach to the character.

Like most of the Ultimates, turning Norman Osborne into a literal monstrosity in the Ultimate Universe was such a mixed bag. On one hand, turning him into a firebreathing hulking strips away the silliness that came with dressing up in a Halloween costume, riding a glider, and throwing exploding pumpkins at bystanders. For once, the Green Goblin became an actual destructive threat. On the other, that silliness is what made the character so iconic and striking in the first place. As a monster, he’s kind of boring since he just punches his way through everything. Him being a monster, however, merits the character a spot in this list of ours simply for being such a drastic change from the iteration.

Cyclops has gone through some pretty cool alternate universe changes through the years, such as his long-hair evil Age of Apocalypse self or the African American Civil War soldier in X-Treme X-Men. Easily my favorite is the Age of X version where Cyke is known by a different codename, Basilisk. For the uninitiated, the Basilisk is a mythical creature with the ability to kill through its stare, a codename that ingeniously apt for Scott Summers.

Given how Age of X is a dystopian reality for this version of the X-Men, Scott in this world is a lot darker than the 616 version. For one, he spends most of his life in a mutant internment camp where his eyelids get surgically removed and powers are used to execute prisoners against his will, earning him the Basilisk nickname. Scott eventually escapes and joins Magento’s mutant resistance in Fortress X to make amends for all the people he executed unwillingly.

If you wanna talk about superhero glow ups, then you have to talk about Baron Zemo as Citizen V. One look at Zemo’s Citizen V should show you just how bonkers this change was. The blank mask, giant sword, USA motif, flowing cape, the over-the-top monologuing about scum and villainy, all make for one of the best alternate costumes for any comic book characters ever.

It also a kickass backstory to boot. You see, back in the day, when all the superheroes disappeared in the fight against Onslaught, creative team Kurt Busiek and Mark Bagley conjured up a idea to introduce a new batch of heroes into the Marvel Universe but with a twist: reveal them actual bad guys in disguise led by a sword-wielding Baron Zemo dressed in the American flag. Alas, the Thunderbolts were born.

Sacrifice for the greater good has always been a central theme of Star Wars. From Obi-Wan becoming one…
Read More

In the discussion surrounding WandaVision, there’s been a lot of theorizing, but possibly even more talk about theorizing.…
Read More