According to a report by TheDirect, Jennifer Walters won’t be the only relation to the Hulk that She-Hulk will be introducing. Apparently, Skaar, The Hulk’s son from the time he spent on Sakaar during the Planet Hulk storyline, is set to make his MCU debut in the upcoming Disney+ series.

As The Hulk rose to dominance in the planet he was once exiled to, his relationship with Caiera the Oldstrong developed, and they conceived a son. When the warp core on Hulk’s ship exploded, killing Caiera, Hulk believed his son had died in her womb. Unbeknownst to him, Skaar survived and was raised by his mother’s Shadow People amongst the ruins of Sakaar before being exiled to Earth. 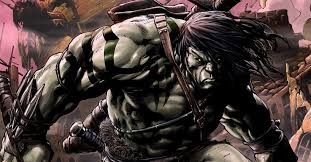 The inclusion of Skaar in the series is incredibly surprising yet entirely sensible and opens up some room for more of the Hulk’s time on Sakaar to be explored. While Caiera didn’t appear in Thor: Ragnarok, concept art of her people, the Shadow People (or the Oldstrong) was developed for use in Thor: The Dark World and it wouldn’t be too difficult to work her relationship with Hulk into the time between Age of Ultron and Ragnarok. Skaar’s arrival on Earth would certainly rattle not only Bruce Banner’s cage but also those who have always been leary of the Hulk. And of course multiple Hulks could be the first step down the road towards something like World War Hulks being adapted into the MCU. The folks at Marvel Studios certainly continue to find ways to surprise and excite us.

Lucasfilm’s Andor has cast Robert Emms, who we’ve previously seen in shows like the astonishing Chernobyl and His Dark Materials. With the…
Read More