Superhero shows tend to go in different directions. We’ve seen their stories evolve from their child-friendly roots to embracing more adult themes. This evolution of storytelling led to Jessica Jones changing the landscape of female storytelling. Frank Miller‘s take on Batman in The Dark Knight Returns showed us a dystopian Gotham haunted by its failures. Yet, there persists an aspect of the franchise that makes it accessible for anyone in the world. Marvel Studios found a way to create an ever-expanding universe that can offer light-hearted stories alongside geopolitical thrillers. DC is taking a different approach by telling stories in different ways, may it be Joker‘s attempt at an avant-garde project or Aquaman embracing the silliness. The Boys took a different approach by completely embracing its R-rating. We’re seeing a curious development with Amazon’s second superhero project, an adaptation of Robert Kirkman‘s Invincible.

Keep in mind, I will be discussing the first three episodes in this article. If you haven’t seen them yet, only continue at your own risk. Now, there is one aspect that makes the latest adaptation rather interesting. The first episode lures us into a false safe of security. It plays out as most superhero stories do. The 17-year-old Mark Grayson, voiced by Steven Yeun, uncovers that he has abilities just like his father. Of course, he sees this as his opportunity to live up to his father’s reputation as one of Earth’s mightiest superheroes, Omni-Man. It follows most superhero conventions by teaching him to control his abilities, face his teenage angst, and find a perfect name. It ends with a triumphant flight through the city as he embraces his new identity before the title card shows up.

It is at this moment that the show ends and the other part of it begins. Suddenly, the story escalates once the title card vanishes. The superhero team, which is similar to the Justice League or Avengers, is murdered by Omni-Man. It’s not even just that he betrays the team out of the blue. He tears them apart. In a way, we shift from an episode of the Avengers: Earth’s Mightiest Heroes straight into an animated adaptation of The Boys. The trailers tease a darker storyline, but it goes that step further to enforce this isn’t your regular superhero story. It isn’t even your everyday R-rated storyline. Its talent lies in balancing the two worlds that heroes can live within. 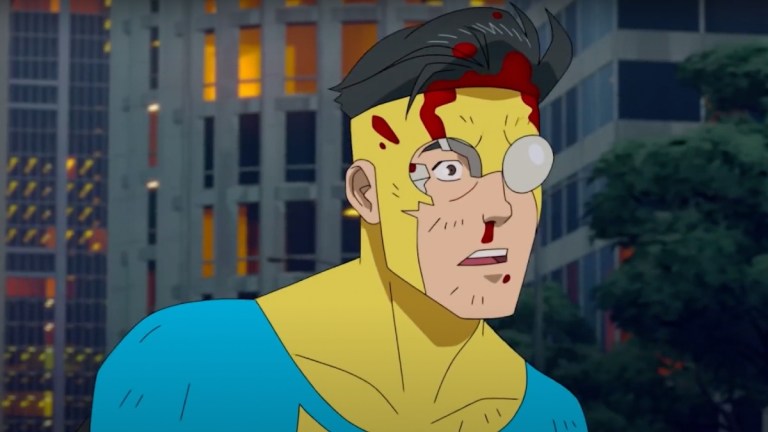 There is a clear development of escalation between specific story beats. In the time we spend with Invincible, we commonly see his world get darker as time goes by. The first large-scale invasion in the second episode goes wrong. Yet, once he joins the Teen Team, it returns to a largely optimistic and comedic tone. That downtime doesn’t detract from the dark aspects of the overarching plot, but it offers a temporary break. In a way, it isn’t a subversion of the tropes we’ve come to love like The Boys is. It simply takes the base concept from comics that we’ve seen since its inception and escalates the violence. There is a reason that the title card continues to add more blood with each episode. Yes, it is adapting an existing comic, but the show uses its animated format to push that escalation. We’ve seen plenty of R-rated animated series do exactly that. So, it isn’t the first to do so. As such, it’s not reinventing the wheel in any way but using the existing and putting the pieces together to create something that feels fresh.