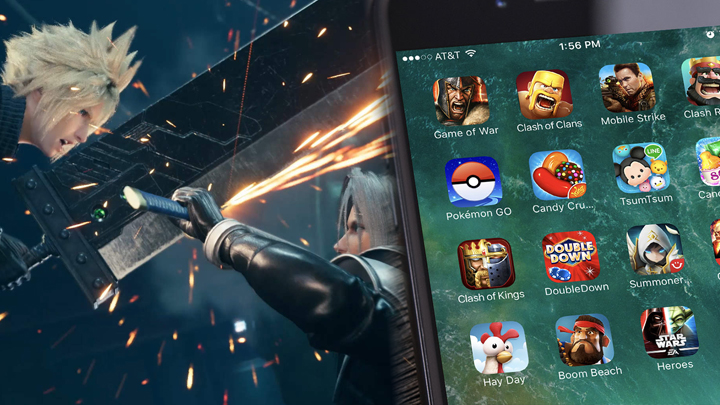 The Final Fantasy 7 Remake franchise is continuing to expand. In the latest PlayStation State of Play, we got a trailer for the first DLC of last year’s remake. It will explore a story that takes place during the Midgar chapter, as Yuffie tries to uncover Shinra’s dark secrets and take them down from within. It looks like Square-Eni wasn’t done with the franchise yet, as they simultaneously revealed two brand new mobile games. Interestingly enough, the titles for these games were leaked two months ago due to trademarks.

The first mobile game is titled Final Fantasy 7 Ever Crisis. It will be a single-player game that covers the entire franchise’s timeline. It even includes the compilation and designs from the Remake franchise. The gameplay showcases the return of the classic ATB system. It even switches between chibi-versions of the characters and their larger designs. The ending seems to tease a story featuring Zack, which could potentially be tied to the ending of Final Fantasy 7 Remake.

It's a chapter-structured single player game covering the whole of the FFVII timeline – including the events of the original game and the FFVII compilation titles. pic.twitter.com/jFJVslYks0

As mentioned before, it wasn’t the only mobile game reveal. It looks like they are dipping their toes in third-person shooters as well. Final Fantasy 7 The First Soldier will be a Battle Royale game that takes place in Midgar before the events of the original game. You take over the role of a SOLDIER candidate, who will take on other players and some classic enemies from the original game.

Here's @FinalFantasy VII The First Soldier – a battle royale game set in Midgar before the events of FFVII. As a SOLDIER candidate, make full use of your abilities in a battle for your survival. pic.twitter.com/EUe3kfonMr

The quality of these games is impressive and showcases how far mobile gaming has come. There is a good chance there are some gacha or microtransactions integrated into the game, as is common for mobile games. I might check out The First Soldier game, as it seems like a fun distraction. Ever Crisis would technically count as a remake of the original with how faithful its adaptation seems to be. I am excited to see what else the franchise might have in store for us, as we anxiously wait for the sequel to last year’s Final Fantasy 7 Remake.