After delving deeper into the background of the diabolical Dragon King and his just-as-Sinister daughter Shiv, Stargirl shifts focus to one of its longest running subplots and puts the spotlight on the King family. For a majority of the season, Henry’s father, Prominent ISA member Brainwave, has been rendered comatose from his encounter with Stargirl and S.T.R.I.P.E with the ISA membrers having little to no success in their attempts to awaken him. This forces the ISA to look for alternative options for the plan for a new and better America, a plan in which Brainwave’s telepathy is integral. They find this potential in his son, Henry, who presented with two paths in this weeks episode ‘Brainwave’.

While still reeling with the discovery of who Cindy and Courtney really are, and simultaneously dealing with his developing psychic abilities, Henry becomes a hot topic on both the ISA and JSA agendas. Courtney believes recruiting Henry to join the JSA could be their next best move and be crucial in figuring out who within Blue Valley is a member of the ISA. This causes further discord within the newly formed team, splitting the team on whether or not its a good idea, with Henry and Yolanda’s troubled past. The ISA believes Henry to be essential to their plan if Brainwave doesn’t awaken in time for project new America. While all this is going on Henry is stuck within his own mind figuring out how to control his newfound powers, going through his father’s old research to try and figure out the extent of his abilities. 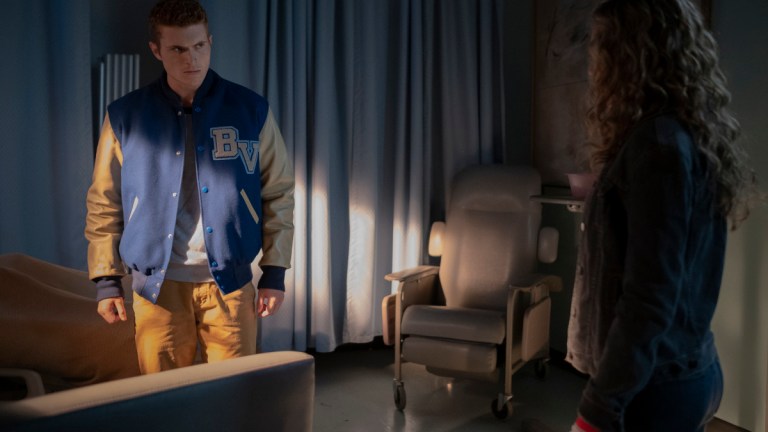 This episode may have had some of the weakest writing and overall delivery of lines for this season so far but Courtney’s words of inspiration to Henry, when trying to convince him to choose them and help save the innocent, using the death of fellow classmate Joey Zarrick to to try and turn the tables. Henry’s development is another shining star in this episode, his mind reading capabilities have shown him the darker part of those around him, the selfish and vile that drive Henry to believe those around him are out to get him and he himself is probably the only one he can really trust. On the issue of recruiting Henry, the loudest response from Yolanda indicates what lengths she would go to keep Henry out of her life, Showing a darker side to her that most figured was there but had never reared its ugly head, goings to such far lengths as to threaten Henry’s life.

Biggest thrills of episode come right from the dinner table, where Courtney and Pat unexpectedly walk into an ambush of sorts that sees them sharing a meal with the Mahkent family. The pair at first aren’t aware of who Jordan Mahkent really is, until the end of the meal when Jordan exposes himself by placing his hands on a hot pan that Courtney realizes who Jordan could quite possibly be, sending her into a frenzy. Courtney’s impulsiveness shines brighter than her staff once more and continues to be her biggest foe as her first idea is grab the staff and go after the Mahkents right after they leave.  Courtney’s inability to learn a lesson is a glaring flaw in her character, and down the line will undoubtedly be the maker of a foe, with seeds already be planted around Blue Valley, who knows where Shiv will end up? It isn’t until the final few minutes were left with possibly one of the biggest cliffhanger of the season, that’ll leave any eager fan crawling back for the next episode.