Brian Michael Bendis can be a tough pill to swallow for a lot of readers. For an entire decade, his name ruled the Marvel stratosphere which a lot of fans grew tired of. He wrote an unreal amount of comics, having practically written almost all the mainline Marvel titles over the course of his tenure with the company. His work arguably served as the lynchpin for the creative direction of the company in the years that followed. It was in the Bendis era that the modern Marvel crossover event was introduced which a lot of people perceive to be one of the worst aspects of the industry. His distinct style of decompressing storylines, making them more drawn out than most, and his quippy Sorkin dialogue makes his work all the more polarizing.

As a storyteller, his strengths were always rooted in more grounded street stories. It’s no surprise that Bendis’ big picture stories such as Secret Invasion and Age of Ultron pale in comparison to his street-level stuff. The reason why Ultimate Spider-Man, Daredevil, and Jessica Jones were huge breakout successes is that Bendis has a full grasp of that seedy world. His impeccable skill in understanding the language of crime stories is due in part to his long stint writing film noir comics. So for him to take the reins of Moon Knight seemed like a no-brainer on paper.

Moon Knight has always been a tough cookie to crack. The logline for the character, in my head, has always been, “Fight Club but with Marvel’s Bruce Wayne.” As a character with a multiple personality disorder, a lot of his stories have leaned towards the unconventional. Writers and artists have taken numerous creative liberties in the ways they could tell a story of a superhero with a multiple personality disorder. Some of them are really introspective and almost surreal, like Jeff Lemire and Jordie Bellaire’s take a few years back. Some barely scratch the surface of the comic’s potential and are more action-oriented like Charlie Huston’s run. Bendis’ stuff falls somewhere in between.

This version of Moon Knight was written at a time where Bendis was riding high on his long-tenure with the Avengers. He had just finished a long run with the New Avengers and was beginning a new run under Marvel’s Heroic Age event. In this new event, Steve Rogers was running his own covert ops Avengers team called the Secret Avengers which happened to have Moon Knight on the roster. The character stepping up to the big leagues may explain why Captain America, Spider-Man, and Wolverine are all crammed into a Moon Knight book.

But crammed as they are, there is a twist to them appearing. You see, Moon Knight has three distinct personalities within him: Marc Spector, the main guy and mercenary, Steven Grant, the playboy millionaire, and Jake Lockley, the Taxi Driver who patrols the grimy streets of the criminal underbelly. Bendis nixes Grant and Lockley from this story and instead has Spector interacting with apparitions of Cap, Spidey, and Logan in his head. It’s a wild departure from Spector’s status quo but has its own merits.

For one, I think the whole thing makes the book a fine entry point for the character. As I said, he is already a fringe character, to begin with. His mythology feels far removed from the standard mythos we usually see in marquee characters (a CIA officer getting killed in Egypt but is revived by an Egyptian moon god and develops multiple personalities along the way isn’t an origin story made for normies). His rogue’s gallery is practically unrecognizable even to well-versed fans. Yet, you see this figure cloaked in ivory white cloth hanging out with the most famous Marvel characters, suddenly he’s a guy that you yourself can hang with.

Part of why Moon Knight gets likened to Batman is the high-tech gadgetry at his disposal. He’s got his own moon-themed vehicles, such as the appropriately named Moon Copter. This aspect of the character is on full display in Bendis’ story, albeit in a fresh utilitarian way, as his version of Moon Knight has gadgets that directly correlate with Cap, Spidey, and Logan. He has a web shooter, an energy shield, and collapsible claws on his forearms. This jack-of-all-trades approach to being an Avenger makes for some really interesting fight sequences. They can go in a slew of ways, some good and bad, but overall just makes Bendis’ core premise work on a utilitarian level. Moon Knight having imaginary Avenger friends isn’t a bug, it’s a totally new feature.

Like most New York-based heroes in the Marvel Universe, they’re bound to migrate to a new location at some point for a change of scenery. California seems to be the go-to for these characters. Even Moon Knight joins the fray of West Coast transplants alongside Daredevil (who made the move to San Francisco a bunch of times) and plants himself into Hollywood, where he gets an opportunity to cash in on his mercenary history by creating a TV series around it. It’s wacky as shit and a drastic departure from the character’s more grounded and serious trappings, but an undeniably interesting one. Bendis really does the job of refreshing the character for new audiences.

One thing that he also does in strides, he puts otherwise B-list characters into the forefront of the more popular stories. Bendis did that when he turned Luke Cage and Jessica Drew into full-fledged Avengers. He’s somewhat doing it here by bringing back long-forgotten Avengers baddie, Count Nefaria, and Echo, Daredevil characters he used during his Avengers run. Anytime an under-utilized character gets pushed into the limelight is always something I appreciate.

The actual plot of this 12-issue comic is, sadly, half-baked. Unfortunately, Bendis doesn’t reach the highs of his other street-level fare with Moon Knight. I think there simply just wasn’t enough meat in the story. As the story goes: Moon Knight discovers that a new crime boss is slowly making their play for Los Angeles. His investigation leads him to the McGuffin of the story: a smuggled head of Ultron. You’d think that in a span of 12-issues, Bendis would delve deep into the complexities of the underbelly of LA and give us a neo-noir hardboiled thriller disguised as a Moon Knight story, but the whole thing ends up whiffing into a plodding story.

Bendis‘s worst habits are on full display in Moon Knight. For one, this is a very slow-paced story. During his pitch-perfect Daredevil run, Matt Murdock would have already gone to hell and back in just a handful of issues. In twelve issues, Moon Knight just kinda lumbers to solve this one case. There’s barely any intrigue to what could otherwise be a really good hardboiled detective story. There’s a fish-out-of-the-water premise to the whole thing that is interesting but doesn’t get explored in any meaningful way. It’s not outright terrible but very little happens in a story with a lot of real estate spread out. I’ve seen writers do more with so much less. It certainly doesn’t help that the story’s ending is a hamfisted tie-in to Bendis’ then-upcoming Age of Ultron event (which ended up being a hot pile of a mess too).

Despite all this, I still think this book is still worth looking at. It’s far from the best Moon Knight run on the market. Several writers have proven that there is more to the character than the generic Fight Club logline I mentioned. But as rough as it can get, a lot of Bendis’s ideas have a cinematic flair to them. It’s no surprise that next to Stan Lee and Jack Kirby, he has the most Marvel creations to ever make it into the live-action realm. His ideas, regardless of execution, resonate well in this modern franchise-driven world we live in. I think using Echo as a foil to Marc Spector is a great choice. I don’t necessarily agree with how Bendis writes Echo at a later point in the story but anytime Echo shows up, I love it. Count Nefaria is in the annals of Avengers history as one of the team’s most vicious villains. The fact that he’s a big bad, in a Moon Knight story no less, is pretty damn fun. I’d love to see Echo and Nefaria in the Moon Knight show.

Lastly, I wanna talk about Alex Maleev’s art. Even the story description didn’t quite work for you, the art of this book alone makes it worth looking at. I’ve long celebrated Maleev as the greatest artist to ever draw Daredevil (sorry, Frank). So, to see him do another street character like Moon Knight is unreal. He has a full grasp of this grimy world’s visual language. His panels always feel huge and grand despite it being set intimately on the ground level. Maleev’s vision is concretely bleak and rustic and brings to life a world in the Marvel Universe unlike any other. 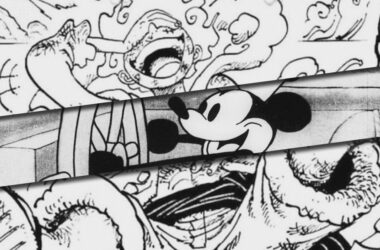 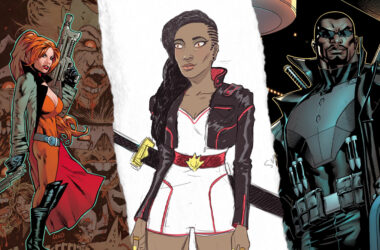 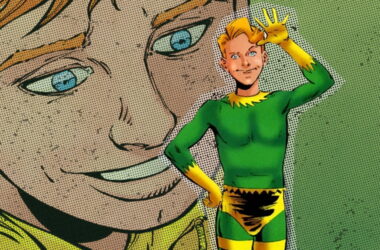