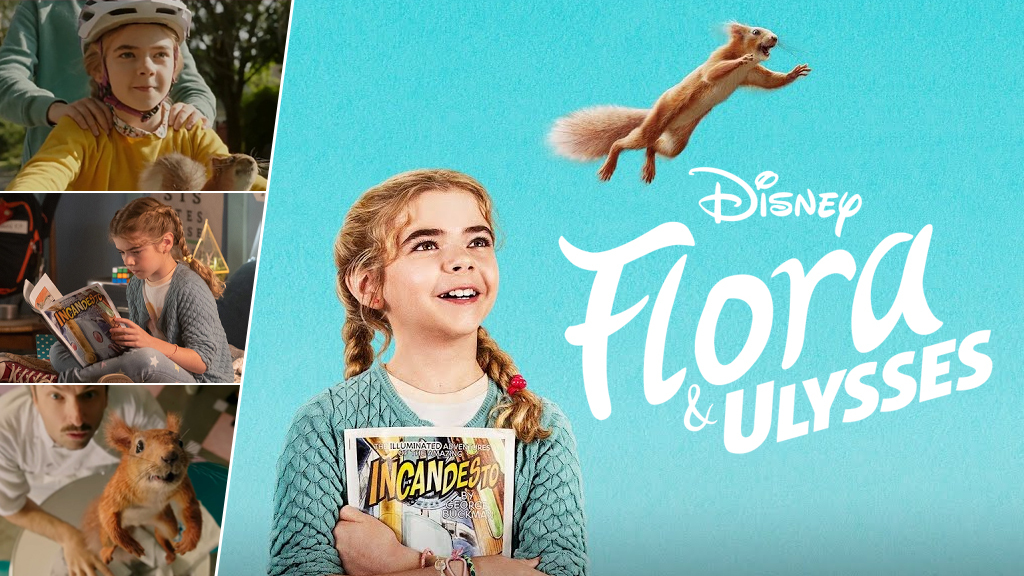 When Disney Plus launched in November 2019, it did so with surprisingly little original content to offer, relying on the strength of the company’s impressive catalog of films and the hope that fans would subscribe for The Mandalorian and stick around as content caught up. That plan took a big hit when the COVID-19 pandemic halted production on all of Disney’s 2020 projects and complicated the post-production work on those that had been filmed. However, the studio was able to find innovative ways to complete their projects and 2021 looks to be the year that Disney Plus makes its biggest move yet in the streaming wars. With over 90M subscribers already on board, Disney Plus has surpassed its 4-year goal in 14 months just in time to roll out an impressive release slate or original content. This coming weekend, the service will debut its first original feature film of 2021, Flora and Ulysses, an adaptation of the 2014 Newberry Award-winning book of the same name by Kate DiCamillo. Aimed at younger viewers, Flora and Ulysses offers enough laughs to keep parents along for the ride as it effectively conveys the book’s messages of hope, love, friendship and family through the perspective of star Matilda Lawler’s Flora. While it might not have opened to huge numbers in theaters, Flora and Ulysses serves as a reminder that Disney Plus has more to offer subscribers than Lucasfilm and Marvel Studios projects and should do very well on the service.

Directed by Lena Khan,Flora and Ulysses follows self-proclaimed cynic Flora as she navigates through the world amid the separation of her parents, played by Alyson Hannigan and Ben Schwartz. Both Flora’s parents are artists struggling with their work (mom is a romance novelist and dad is comic book creator) and in their struggles have gone their separate ways, leaving Flora feeling rather hopeless and alone. A fateful and relatively ridiculous accident caused by an out-of-control vacuum and an unfortunate squirrel set the course for the main plot of the film. After resuscitating the squirrel, Flora soon comes to find out that her newfound pal isn’t your garden variety squirrel: somehow the accident imbued Ulysses (named for the vacuum that took him out) with superpowers…and the gift of poetry. As Ulysses and Flora discover exactly what the super squirrel is capable of, his presence threatens to widen the rift between her parents and, once he accidentally outs himself to the world, invites an even greater threat into Flora’s life: animal control!

While you might initially find the idea of a super-powered squirrel to be an entirely absurd premise, the film honestly underutilizes it, sometimes relying on Flora to remind Ulysses to “flare up like a flame” in order to unleash his awesome powers. Though Lawler brings Flora to life wonderfully, Benjamin Evan Ainsworth’s William Spiver steals most of the scenes on the human side of things. If there’s a true weakness to the film, it’s honestly the overdependence on the adults. Schwartz and Hannigan often overdo it, but if anything it highlights the importance of Flora. While the adults certainly serve their purpose (I always wondered what kind of parents let Dora and Diego on adventures with wild animals), 90 minutes of Flora, William and Ulysses might just be perfect recipe.

While the film’s reminder of Flora’s motto, “Do not hope: instead, observe”, from what appears to be her life’s handbook, Terrible Things Can Happen To You, seems a little heavy-handed at times, it’s so integral to the core of her character and her journey that its repetition is understandable. As the story develops, Flora finds it more and more difficult to keep hope buried at the expense of her cynicism and the true heart of the film is learning that there’s room for a healthy balance between the two. Of course, as is always the case with superheroes, it isn’t Ulysses superstrength or ability to fly that makes the biggest impact on the story: it’s his ability to teach a family that’s lost its way that it’s ok to hope and that it’s never too late to turn back to the ones you love.

Flora and Ulysses streams this Friday, February 19th, on Disney Plus.