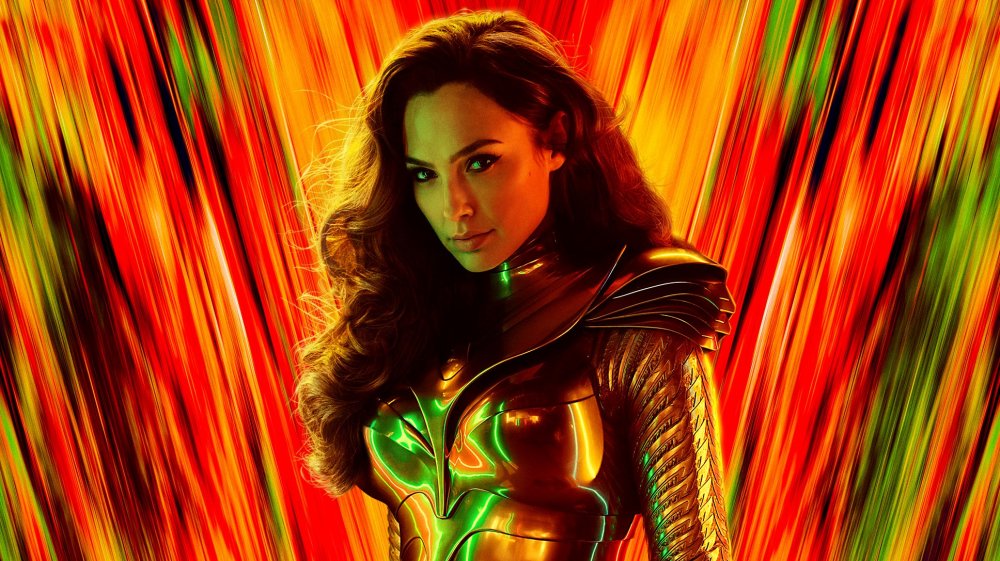 Having been a long-time Wonder Woman fan since Lynda Carter spun around in those star-spangled pants, I’ve been eagerly awaiting Wonder Woman 1984. While it’s not perfect, and certainly there are things I would change if I could, overall, I enjoyed the sequel. It’s at least equal to my enjoyment of the first but for different reasons.

***Beware there are spoilers below!***

On the negative side, the film spent a bit too much time on 80’s nostalgia silliness. Also, I would have really liked it if they had worked a few of the great pop songs of the early 80s into the soundtrack. It seems almost a waste now, to set the film in 1984 and not bring more of the hits that came out that year. I found that the first and second act, dragged a bit, and were less effective than the third, which seems opposite to how I felt about the first film. On the positive side, there were some terrific fight scenes, and a number of exciting new skills Diana used during the film. Pedro Pascal and Kristin Wiig both give strong performances as the antagonists. This is particularly true for Pascal in the last scenes of the third act.

As we open on this film, we see Diana recalling her childhood with the Amazons, and the young Diana (Lilly Aspell) joining in with older much larger competitors in a tournament which Diana very much wants to win. An almost faulty desire for the glory of winning is clear on Diana’s face as she looks back from her horse to check where the other girls are, and gets knocked off. It seems Diana has lost, until she finds a shortcut and takes it, and soon she’s back up on her horse and in the lead again. At first glance, this tournament might seem like a bit of extravagant Amazonian filler, but what happens next as Antiope (Robin Wright) takes Diana out of the lead, foreshadows the morale of this story. “No true hero is born from lies” and we must face the truth bravely. Because, in other words, lying and cheating to get what or where you want has consequences.

In 1984 Diana’s case, what she wants is her lost love, Steve Trevor (Chris Pine), to return, something which an ancient artifact that grants wishes soon gives her. Pine and Gadot’s chemistry in the first film was a highlight, and that is certainly reignited throughout the film. Sadly, Steve and Diana eventually realize that the cost of her wish, the consequence of believing the lie, is a loss of Diana’s power and strength. She can no longer fight as well, she is much more vulnerable to injury, and if she is to continue to save people, to potentially save the world again one day, she must be a hero and stop believing the lie. She eventually must come to terms with this and renounce her wish and lose Steve for a second time, and forever, or risk letting the world go up in a nuclear war. Diana’s heartbreak in her final scene with Steve is as emotional as their farewell in the first film.

Then we have Pedro Pascal as Max Lord. At first glance, Lord is the perfect over the top, greasy, greedy, villain for the 80s, a decade known for excess. As we progress and certainly before the third act is finished, we see a bit more clearly into the murk and slime of his character to realize he is in truth a desperate perpetual loser, trying to win and gain power, money, glory, by any means he can. Even as his health is being threatened by the wishes, he still believes more is not only better, but it’s never enough because, as we later learn, he never had much of anything to begin with. If “no true hero is born from lies”, Maxwell Lord has believed the lie to the point of becoming the villain of this story, when all he really wanted was to be the hero of his own story, and as we find out in his final scene, a hero to his son. This added context to the character, beyond him being just some slimeball we can’t wait to see the hero of the story take down, makes him quite compelling in the third act, and significantly more than Ares the villain of the first Wonder Woman film. Pascal’s performance in his final scene with this son in particular, drew tears from me, as he renounced his wishes and ran to save his boy, and as he emotionally told his son the truth about himself, that he wanted his son to be proud of him, that his son doesn’t have to wish for him to love him, that he hopes he will someday forgive him. While it is unclear what happens to Max Lord after that, and it certainly seems that there should be more consequences for Lord in the aftermath of nearly causing a nuclear war, I found this final scene, quite powerful and didn’t mind them ending his story here on that note. After all, if Darth Vader had survived Return of the Jedi and not died after saving and making amends with his son, would we have wanted to see him tried and imprisoned or executed around the same time of the film everyone’s singing happy Ewok songs and celebrating the end of the Empire? That would have been rather jarring, so.. probably not. 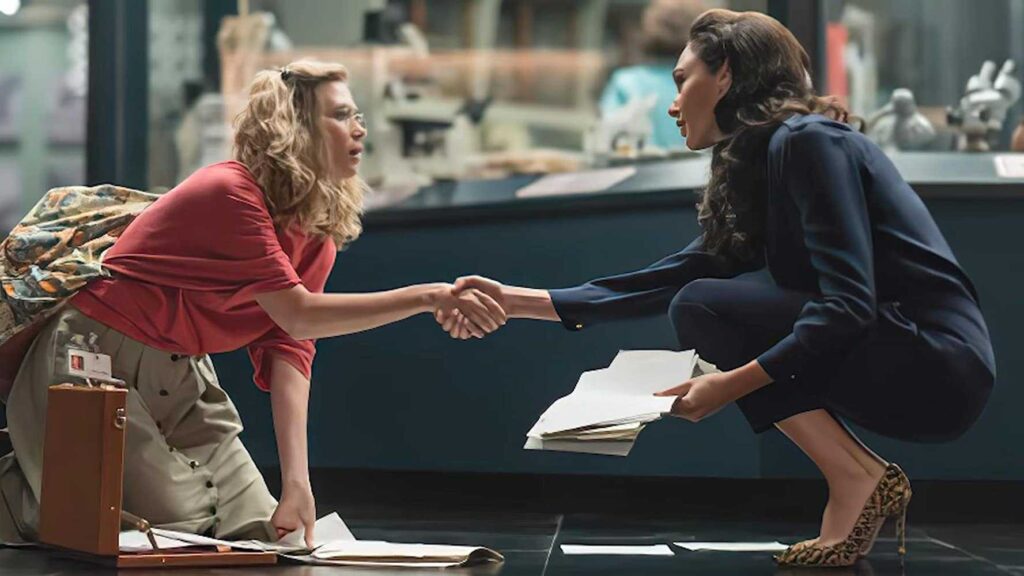 Barbara Minerva (Kristin Wiig), geologist and new friend of Diana, is similarly seduced by the wishes and the lies of the Dreamstone. Wiig’s performance as Barbara is compelling: from nerdy loser at the beginning, through powerful apex predator, until her final moments in the film. I’ve seen the “nerd becomes the villain” trope a few times now and as a nerdy girl with glasses myself, I’ve become a bit tired of this as I’ve seen it done incredibly poorly a few times. But Wiig and Patty Jenkins got it right, I think, so it works. Barbara starts off shy and awkward, but funny, sweet, likable, endearing, and relatable in many ways. Then came her assault scene. It is unfortunate that even today many, many women can relate to that feeling of being stalked, and unsafe, unable to go out and walk without being leered at, looked at as no more than object to be used, or attacked. When she pays back her attacker later in the film, certainly there is a degree of empowerment of a person who was previously quite powerless, and the satisfaction of her “villain” getting what he deserves. But then the mood and the scene turns, and we see the consequences of her believing this lie, along with the homeless man she had given food to just a few scenes before. What this lie, this wish to be more powerful and “like Diana” is robbing Barbara of is her kindness, her good heart. She is already becoming less human and more predator.

And in fact, Barbara, Max Lord and Diana are not the only ones who have to deal with the terrible consequences of their wishes and lies. The entire world is facing the consequences of trying to cheat to win, and believing in harmful wishes for personal gain or satisfaction. This is true from the U.S. President, who wishes for more nuclear bombs, then is suddenly faced with the brink of an apocalyptic war, to the man who yells at a woman to drop dead, and then she collapses from a heart attack. 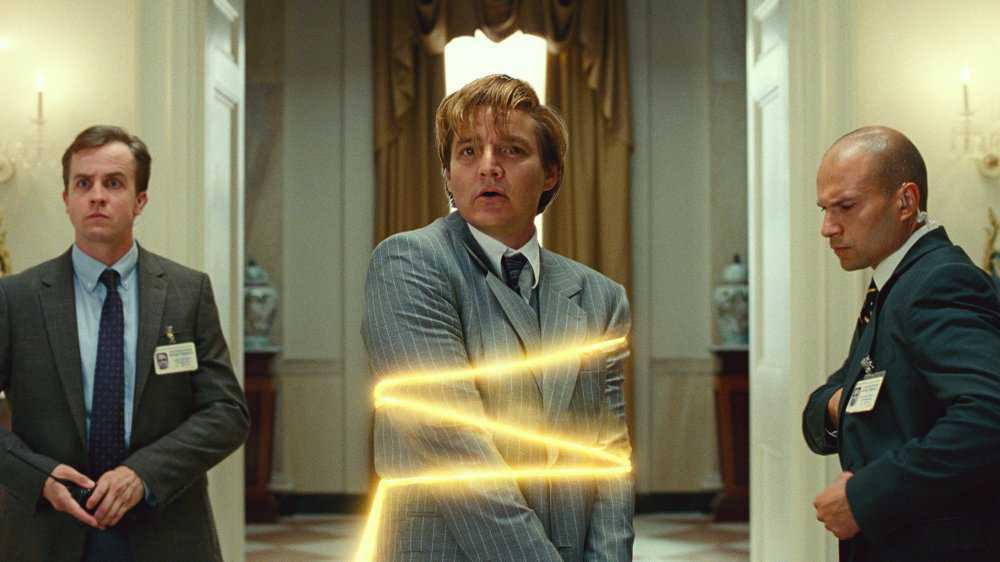 During the third act, when I realized that Diana, in her sad, exhausted, desperate, but beautifully performed speech, is asking everyone in the world to renounce their wish, I admittedly felt skepticism. How could that possibly work because of course people are flawed and often selfish? Yet in a way, that made the whole thing even more dire. The final threat to the world felt legitimate and terrifying here, because human nature is at the center of it. Is it a realistic expectation to have the world decide to put aside personal needs, greed, and selfishness to save others? Perhaps not. Reviewing human history would tell us it is not realistic, unfortunately.  But this is why I like superhero movies like this; they give me hope, at least for a moment, that people really can choose to be better, they can win honestly, they can choose truth and kindness, over greed and hate, and sometimes they can turn away from darkness and sincerely try to make amends for their mistakes. Of course, some of you may think that it is in fact believing a “lie.” But hope is an important element of most superhero movies and it’s an incredibly important thing for human beings to retain just to get through life. Hope in good triumphing over evil. Hope in human beings doing the right thing. Hope to get through especially hard times, and major challenges. After this past year, we need inspiration for light and hope now more than ever and this is what superhero movies, more often than not, helps give us.