In 2013, Sony Pictures began development on a female-centric Spider-Man spinoff set to feature Felica Hardy, aka the Black Cat, who was played by Felicity Jones in 2014’s The Amazing Spider-Man 2. The original script, written by Lisa Joy, survived the Sony/Disney deal and evolved over the years as new writers put their own spin on it until finally, in 2017, Gina Prince-Bythewood, who had been hired to direct what had now become Silver and Black, went to work on finalizing the script. Production on the film was set to begin in March of 2018 in preparation for a February 2019 release, but was delayed as Prince-Bythewood continued to tweak the script to her liking. By August of 2018, Silver and Black was dead with Sony planning instead to make two films, one for Felicia Hardy’s Black Cat and one for Silver Sable. In April of 2020, Prince-Bythewood indicated that Sony had, once again, shifted gears on the project, now hoping to develop it as a limited streaming series which she indicated might be headed for Disney Plus (I’m not entirely sure that’s possible). Alas, here we are, in June of 2020 with neither a Silver nor a Black and no indication that we’ll ever see one, the other, or both. In it’s place, I offer a look at what the film might have been had in gone into production in March of 2018.

This information is based on conversations with people who had knowledge of the film’s direction as of early 2018, so while it may not have been the way the film ended up working out since the director was still rewriting it, it is the best we are going to get right now. I will also attempt to determine who and what was removed and added based on conversations with people who were privy to info about the film’s direction before Prince-Bythewood began her rewrites.

The film would have centered on Silver Sable’s pursuit of master thief Black Cat with Sable working as a bounty hunter for the U.S. Department of Justice. Hardy had volunteered to undergo experimentation at the hands of Dr. Mendel Stromm, who would have also gone by his comic book alias, Gaunt, in this film. The procedures were meant to enhance Hardy’s skills by installing AI tech into her body; after receiving the upgrades, Hardy escaped Gaunt’s lab with her new powers not entirely under control and headed for South America. Silver’s motives for taking the job aren’t entirely professional, however; Gaunt was responsible for the death of Silver’s father, Ernst Sablinova, and the torture and death of some of her fellow Symkarians, and she wants Hardy to lead her to Gaunt so she can extract her revenge.

Fans of the comics might be familiar with the Wild Pack and they would have had a presence here as well. Brought together by Silver’s father, Ernst, the comic book group took on the task of interfering with international crime and though this group is a little bit of a mash up, its goals are the same. The headliner of the squad was set to be Dominic Fortune. Fortune originally worked for Ernst and Sable before going to work for the U.S. DoJ and is now reunited with Silver here under the direction of Korean-American DoJ Agent Mark Sim and working with Agent Klein. Sim’s character has always been interesting to me given his comic book counterpart is the NuHuman known as Haechi who first appeared in 2014’s New Warriors book. Earlier versions of the script saw some other members of the Wild Pack as well and it’s unclear how many of them we’d have seen, but the setup remained the same: Silver and Fortune would lead a DoJ team in pursuit of Felicia Hardy with Silver never intending to bring her in and, instead, use her as a means to her own ends. To aid in finding Felicia, Silver uses one of her contacts located in the Tri-Border region of South America (an epicenter of organized crime and the working title of the film): Dmitri Smerdyakov, the Chameleon. A man on the run from his own past, Dmitri has made quite the reputation for himself at the Tri-Border as the guy in-the-know. Though he only has a handful of scenes in the film, he does show off his skills as a master of disguise and helps Silver locate Hardy.

Unfortunately for Felicia, Silver and DoJ aren’t the only ones out to get her. After undergoing her experimentation, Felicia ruined Stromm’s plans to add her to his gang of experimental goons, so he sends a couple of them after her: Mac Gargan (Scorpion) and Anton Rodriguez (Tarantula). Like Hardy, they’ve been experimented on and upgraded as well with Gargan wearing a full exoskeletal suit and Rodriguez sporting an boot with some sharp exo-upgrades. Additionally, Hardy’s past as a criminal has another player in pursuit of her as well as Lonnie Lincoln, aka Tombstone, is out to kill the cat as well. Sadly, Tombstone didn’t have much of a role in the film, appearing for little more than an elongated cameo. Fortunately for Felicia, Silver catches up with her first. 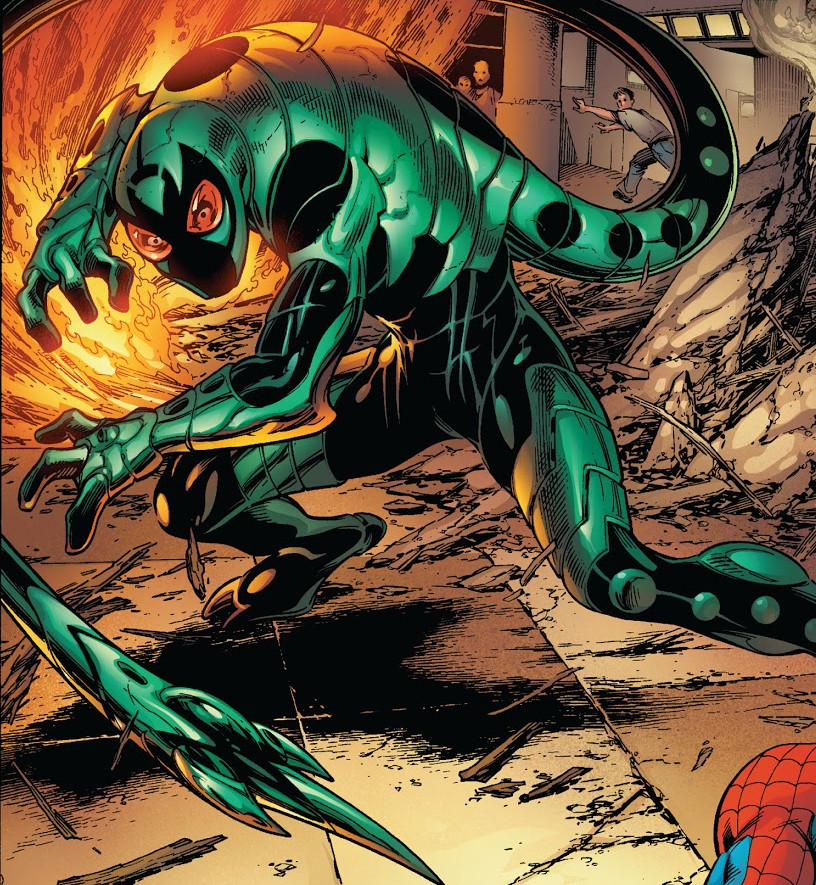 From here you have the duo on the run trying to evade everyone that they’ve betrayed, double-crossed, stolen from and pissed off. Rodriguez catches up with them in Rio with Rodriguez trying the James Bond approach before being taken out courtesy of Felicia’s new powers and a train car. Gargan also has a tough time dealing with the ladies as he’s roughed up considerably as well. Eventually, however, Hardy is recaptured by Gaunt and taken back to his lab where she’s tortured by Gargan. The final act of the film saw Silver team back up with Fortune and infiltrate Gaunt’s lab to liberate Hardy. You might also remember the rumor that one of the film’s final scenes would see Silver assemble an all-female squad of characters like Spider-Woman, Jackpot, Stunner and Dusk to join her and Felicia on what was described as a “female version of the Dirty Dozen.”

One of the most interesting parts of the changes to the 2018 version and something I’ve reported on before and talked at length about on Twitter was the apparent removal of Norman Osborn. In 2017, Sony was set to have Osborn in the film as the man behind the curtain funding Stromm’s work. While we would see Charles Standish work as Osborn’s messenger, Osborn himself was to be heard, not seen, in the film but he was absolutely a part of it. Following the success of 2017’s Spider-Man: Homecoming, rumors started to swirl about Marvel Studios interest in getting Osborn into the MCU down the road. Following those rumors and Prince-Bythewood’s rewrites, I was unable to find any information about Osborn’s appearance in Silver and Black. To be clear, that doesn’t mean beyond a shadow of a doubt that Osborn would not have appeared in the film (it’s just as easy for them to remove him from the script or any casting calls and keep it close to the vest), but it was an interesting development to say the least. Additionally and on a related note, I was unable to find evidence of the role of Charles Standish surviving the rewrites either.

Though Prince-Bythewood hopes to see this script survive and be adapted to Disney Plus (given the fact that Keaton’s Vulture is in Morbius, who knows what the deal is that Sony and Marvel Studios have at this point and how possible a co-op with Marvel might be), the creative log jam caused by COVID-19 makes that prospect fairly dubious at this point in time, casting even further doubt on whether this project will survive in any form. To my knowledge, despite being in preproduction for years, nobody was ever officially cast for the film as the script was always undergoing changes. As of today, it really looks like this one might end up in the scrap pile on top of Nightwatch, but stranger things have happened.

Would you guys have been in theaters on day one to see this version of Silver and Black? Let us know via Disqus!

REVIEW: ‘Interview with the Vampire’ Episode 1