After months of speculation, Marvel Studios finally revealed the release date for the upcoming Disney+ series; WandaVision. Along with that release date announcement, came a short teaser:

Now at first glance, this looks like a normal moving poster or just a small teaser that you’d see on their Instagram stories just to promote the show. But we all know Marvel Studios better than that. Sometimes, they’ve been known in the past to sneak some secrets or teases here and there. So, let’s take a look at this small teaser for a moment and notice what we see.

The teaser opens up with a pretty straightforward shot. The scene is in black and white and it showcases Wanda and Vision in their 60s phase. This portion of the show is the one that we’ve seen the most of in teasers. It’s also been the segment of the show that we know more details about. We know it’s inspired by comedy classics from the ’60s like The Dick Van Dyke Show, Bewitched, The Twilight Zone, and I Love Lucy. We also know that it was filmed in front of a live studio audience. And it been the source of much of WandaVision’s promotional materials.

The next shot fast forwards to the next decade which would be the 1970s. While we know little about this era in particular, we know that at some point during this portion of the show we might see Wanda’s pregnancy start here and develop further along during this specific episode. We expect this era might be inspired by The Brady Bunch & All in the Family.

We eventually transition to the 1980s, where we see a standard 80s double knob TV, the color is finally present in the entirety of the room and the potted plant on the left changed. We know little about this era for the show but I predict this might be the part of the show where Wanda’s pregnancy is near her final trimester and she may give birth by the time we end our 80s tribute. I envision this era taking inspiration from Happy Days & The Golden Girls.

The 1990s is the other era that’s been heavily teased in the teasers. We know from this era that we’re going to see an episode centered around Halloween. We also expect the twins to have been born by this point in the series. This is also the segment in the series where i expect things might start to unravel for our two main heroes. I am definitely sensing a heavy reference of Full House for this episode in particular.

This is more of a “blink and you’ll miss it moment” in the teaser, where the TV starts spiraling out of control between images and it showcases all the eras in the TV that we had already seen previously, except 2 shots in particular. The one on the left looks to be from the 90s, when Wanda and Vision’s kid have already been born and the one on the right bears a resemblance to when Wanda and Vision start seeing the world change around them from black and white to color.

You also take notice of a couple of things in those shots. Primarily, when the 90s era tries to go to the next era, as we mentioned before, the TV starts spiraling out of control between images and it showcases all the eras in the TV that we had already seen previously. But while it’s spiraling out of control, you notice a couple of key details in the surroundings that start to fade in, but are immediately pushed back and kept hidden. So, let’s look closer at the image and look at the things that stand out.

The final shot in the tease happens after everything went haywire and it just goes back to normal, revealing the release date of the show and the title card. A fun little detail about this shot is if you notice on the top left corner, the wall starts to peel off, revealing tv static. Very intriguing. Perhaps the teaser as a whole represented a metaphor for what might happen in the series.

All of the TVs shown in the teaser are representative of their eras. But there was one TV that popped up for only about 5 frames before disappearing again.

What’s interesting about this tv? Well, it’s actually not the TV itself, but rather what it’s on. This old TV stand on wheels is something commonly seen in hospitals. Interestingly enough, Charles talked about WandaVision filming inside a hospital about a year ago. So I’d check up on that if you need a refresher. 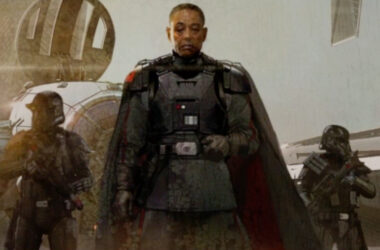 The season finale of The Mandalorian has finally arrived. We finally uncover what the future holds for our favorite Mandalorian…
Read More 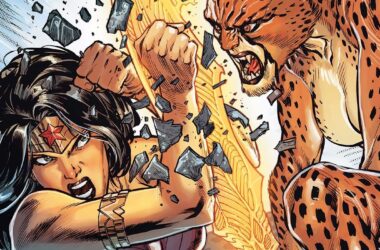 One of the best parts of Wonder Woman 1984 was the inclusion of Kristen Wiig’s Dr. Barbara Minerva. Throughout the film, she…
Read More